Are These Guys Serious...? 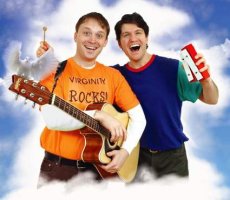 We've gotten into watching Last Comic Standing. There is this duo called God's Pottery whose act is to sing a song about Christianity. The thing is, the morals of their songs aren't all that far off—they are amazingly truthful. All the while, their act is funny.

Now, if you go to their web site, it's difficult to tell if their act is all that: an act. A search of their school, Christ our Leader College, yielded no results, so it would seem they are fake. Still, that doesn't mean that their act is entirely an act, just that their back-story is only a story.

They're kind of like Weird Al Yankovic to LOST AND FOUND.

What Month is It, Again?

check out our weather

I love the weather here (seriously)!

So, I'm playing around with things and discovered that Flock is available for linux. Why I didn't know that before I'm not sure. So, I downloaded it and started it and tried setting it up so that I could publish to my web site from it. And it worked. Here I am posting from it, in fact.

Will I keep on doing this via Flock? Probably not. I'm not able to split an entry up so that only part of it displays on the front page (and the rest, thereby, accessible on an entry page). Nevermind that my default and preferred browser is Firefox. Still, it's kind of neat to be able to do this; so, I may do an occasional entry from Flock if I ever find myself using the browser again in the future.