A Quote I Stumbled Upon

Where would we be right now without the plot to kill Jesus?

We heard just Sunday that Satan left Jesus after tempting Him for a more opportune time. Tonight we hear that Satan entered Judas, surnamed Iscariot, who then conferred with the chief priests and captains in order to betray Jesus to them. The time had come. Satan was going to have his little time with the people and with Jesus...or so He thought.

I've done it again, though like this is a first time. The first time, I hacked PivotLog so that some basic UserAgent information is displayed with comments; then, converted that hack for PivotX. Now, I've written an extension for PivotX that I've called Blog Stats.

As the boys were walking to school, one of them turns to another and says, "I asked my old man about sticking your tongue to metal light poles in winter and he says it'll freeze right to the pole just like I told you." The other boy replies, "Ahh, baloney. What would your old man know about anything?" Later that day, in the schoolyard at recess, we find the boys around a flag pole. A crowd had gathered around them at this point. The first boy looks at the second and dares, double-dares, and double dog-dares him to put his tongue to the pole. The third boy who was walking to school that morning, via adult narration, tells of the progression of dares in his childhood. Suddenly, the first boy skips the all-important triple-dare and goes for the coup de grâce triple dog-daring the second, creating a slight breach of etiquette. Surely, we recognize this scene from A Christmas Story. Flick sticks his tongue to the pole and ends up "thtuck, thtuck, thtuck!"

Recess ends and the crowd returns to their classrooms because, well, "the bell rang."

"In the sweat of your face you shall eat bread Till you return to the ground, For out of it you were taken; For dust you are, And to dust you shall return."

As we begin this 40-day season of Lent, these words ring in our ears this Ash Wednesday. We have received the imposition of ashes, a reminder that we are dust—that we are created out of the same stuff as Father Adam, and that like him, we will return to that stuff.

Then, why do the lessons appointed for this day not speak of this fact? Why are we instead pointed to almsgiving, praying, and fasting? Simply put, it has been traditional in the church for these activities to increase in this season.

Print Entries...If You Wanted To

I've created a template so that the entries here and any comments and trackbacks are formatted in a way that they print with minimal graphics and, generally, printer-friendly. I'm still working with the styles some to make it look and print better, but it's workable they way it is right now. You can find the link to the printable version at the bottom of each entry where the entry details are listed.

Transfiguration of Our Lord

Now it came to pass, about eight days after these sayings, that He took Peter, John, and James and went up on the mountain to pray. As He prayed, the appearance of His face was altered, and His robe became white and glistening. And behold, two men talked with Him, who were Moses and Elijah, who appeared in glory and spoke of His decease which He was about to accomplish at Jerusalem.
But Peter and those with him were heavy with sleep; and when they were fully awake, they saw His glory and the two men who stood with Him. Then it happened, as they were parting from Him, that Peter said to Jesus, "Master, it is good for us to be here..."

Could you imagine being there? How glorious it must have been! Jesus takes you to be with Him up to the top of the mountain where a most radiant light shines from Him. To top it off, Moses and Elijah appear—only two of the greatest figures in Scripture! "This is cool," someone might say these days. Or, to speak to you kids, "This is phat!" (That's p-h-a-t phat, for you non-youth...it's a good thing, trust me). Or, you could just say what Peter says, and mean the same thing: "It is good for us to be here."

Of course, there have been many more opportunities for Peter or another disciple or follower to say such a thing.

Fifth Sunday after the Epiphany of Our Lord

And here's the girl at "college." 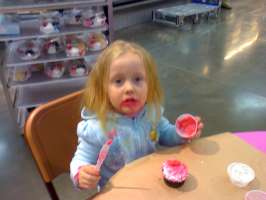 It was cupcake college day at Walmart. So, we loaded up our boy on sugar! 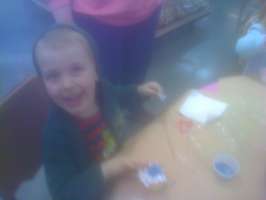 Fourth Sunday after the Epiphany of Our Lord

It is a familiar saying that John 3:16 is the Gospel in a nutshell; that God loved the world, so He sent His Son. "For God did not send His Son into the world to condemn the world, but that the world through Him might be saved." We are familiar with the liturgical song, the Agnus Dei which proclaims with the other John that Jesus is the "Lamb of God, that takest away the sin of the world." St. Paul is keen to tell us that "God was in Christ reconciling the world to Himself."

So, the other day, Safeway had this special where you spent so much, and got bags of Doritos for cheap. We saw this flavor—Doritos Late Night All Nighter Cheeseburger—and thought we'd try them.