a letter by a lawyer

What follows is a powerful letter by a former constitutional lawyer regarding the recently passed health care bill. It was written well before the bill was passed, but it is still appropriate given the fact that it's still the same bill.

"Most assuredly, I say to you, unless a grain of wheat falls into the ground and dies, it remains alone; but if it dies, it produces much grain."

In the name of the Father and of the + Son and of the Holy Spirit. Amen.
No Audio
service canceled due to poor roads

Jesus' journey is near its end. He has been plotted against by one of His own disciples, who conspired with the chief priests and captains of the temple guard. He celebrated His last passover supper with His disciples, fulfilling the Passover as the supper of His body and blood for the forgiveness of sins. He prayed earnestly and in much agony, sweating drops of blood. He has been taken prisoner, bound, blindfolded, and beaten. He was tried and convicted of crimes He did not commit, sentenced to death for the crimes—that is, sins—of the people. Now, He is on the way to Golgotha.

Early in the career of almost every student in the United States is learned the phrase from the Declaration of Independence: "We hold these truths to be self-evident, that all men are created equal, that they are endowed by their Creator with certain unalienable Rights, that among these are Life, Liberty, and the Pursuit of Happiness." And like little, mindless automatons, we soak it in and soak in the way it is falsely taught. There are a few, however, that learn to question what they are taught, not to be confrontational, but to be inquisitive. To them is granted the knowledge found in the following line.

How Does This Make Sense?

Explain it to Me

So, I'm now going to be fined for not buying something I cannot afford by the government forcing me to buy that which I cannot afford. How can that not scream socialism and fascism?

Jesus tells another parable involving inheritance. A man owns a vineyard, leases it to some tenants, and goes off to a far country. The time comes for the harvest, and the owner sends some servants to collect payment. It's only fair—it's his land that they are farming, he's owed payment for its use. Three times a servant is sent to the tenants; three times the tenants beat the servant and send him back empty-handed. Then, the owner sends his son—his beloved son—figuring that he would receive more respect than his servants. On the contrary, the son is beaten and killed. They figure they will get the land if the son is killed.

and the 300th entry to this site

It's no secret that I like the Winter Olympic Games. I really enjoyed the games this year, though I would have preferred more diverse coverage than what we got simply on NBC and Universal Sports (we don't have cable); and I could have done with less figure skating. I even enjoyed the closing ceremonies. But, I miss the games.

and a great series of videos, too

A bit of a warning (I guess) before you watch it. The intro and outro are loud compared to the actual "content" of the video, so adjust your volume accordingly. Don't expect to see a man vested and in a pulpit, looking like a "stodgy old minister." Oh, he's a confessional man, alright, but not what one might expect such a man to look like.

In any event, enjoy the video!

I have been including audio of my sermons with the manuscripts lately when I've been posting them to the site. As these mp3 files have been ranging from just over 5MB to just over 10MB each, they would quickly fill up the space we have at ms11. So, I found a free host at which I get 1GB of space. I'm putting my audio files there; it should last me a little while, and give me some time to find some more for when I need it.

The side affect of this is that the flash player on the site no longer displays the id3 tag information of the mp3s. You can, however, still listen to them as normal.

If a file doesn't start playing (the player gets stuck on buffering), let me know. I might have inadvertently skipped editing that entry.

Not Simply a Confessional Man, He Gets It

A little explanation: I come down on the confessional side of Lutheran "polity." I took my vows to defend and uphold the Scripture and Confessions of the Lutheran church, and I take those vows seriously. Heretofore, there have been candidates for president who have been confessional, too. They have been good men, and I respect them.

Had to get some brake work done, so I walked to the office to get some things. Along the way, I came across our resident group of deer. You might be able to see them among the trees. 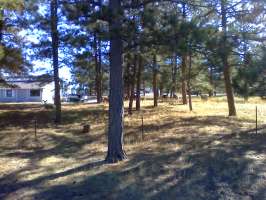 Tonight's Gospel begins with Jesus informing the disciples that Satan intends to sift them like wheat, to separate them and put them through agony. The "you" in that verse is plural; Jesus is referring to all of the disciples. The time had come, Satan has found his opportune time following his temptation of Jesus in the wilderness some 18 chapters ago in Luke.

But, Jesus has a different plan.

[F]aith must have something which it believes, that is, of which it takes hold, and upon which it stands and rests. Thus faith clings to the water, and believes that it is Baptism, in which there is pure salvation and life; not through the water (as we have sufficiently stated), but through the fact that it is embodied in the Word and institution of God, and the name of God inheres in it. Now, if I believe this, what else is it than believing in God as in Him who has given and planted His Word into this ordinance, and proposes to us this external thing wherein we may apprehend such a treasure?

Then He said to them, "With fervent desire I have desired to eat this Passover with you before I suffer; for I say to you, I will no longer eat of it until it is fulfilled in the kingdom of God." Then He took the cup, and gave thanks, and said, "Take this and divide it among yourselves; for I say to you, I will not drink of the fruit of the vine until the kingdom of God comes."

St. Luke is keen to keep us filled in to the urgency of things. Last week, we heard that the Feast of Unleavened Bread was approaching—it was the time for the Feast. At the beginning of this evening's gospel, it was the day of the Feast itself—the day on which the Passover Lamb was to be slain. Then, in verse 14, we are told that it was the hour at which the meal of this Feast took place—the time when Jesus and His apostles reclined at the table. If our focus has gone from a nebulus "time of" to a finer point of "the hour," something special must be happening...something special must be coming.

Well, Isn't This an Interesting Development

A First for Me

I had my first beer today. Not my first taste of beer. I finished a full 12 oz. bottle of beer today.

I'm 33. I never developed a taste for beer. Ironically, though, I like Beer Cheese Soup. That's why I had my first full beer. I've made the soup before with Sam Adams Brown Ale (as mentioned in that entry). I couldn't find any for today (I'm making the soup for tonight's Lenten Soup Supper at church), so I got a six-pack of Michelob's Amber Bock.

It'll definitely be good in the soup...yummy!