As our Gospel lesson begins, we find Jesus strolling on Solomon's porch in the temple courtyard. It was the Feast of Dedication, a time we know better as Hanukkah. By this time, Jesus had become pretty well-known: He was the man who taught with authority and healed all manner of diseases incurable by the medicine of that time (some, even of ours) and cast out all kinds of demons. As great as a following He had acquired, so was the reputation He had developed throughout all Judea.

The time, location, situation, and reputation all lead up to the question the Jews ask Him: "How long do You keep us in doubt? If You are the Christ, tell us plainly." "Why are you keeping us in suspense? We know who you are. We've seen and heard of what you've done. Why don't you just come out and say it, you're the Christ, the Anointed One...the Messiah." To understand what they are asking and demanding of Jesus, we have to understand what they are expecting of Him.

Spent the night in Glenwood Springs before a job in Grand Junction today (and Aspen tomorrow). The sun rising onto the mountain displays the grandeur of God's creation. 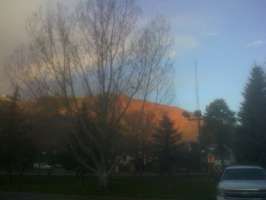 There once was a man in Galilee who was a fisherman. He did not work at this alone, for his brother and at least two friends were partnered with him. One night, he and his partners go fishing. They cast their nets and toil through the night, but catch nothing. Dejected, they return to shore in the morning. After a long night of fruitless work, it must be hard to tend to the necessary chores—harder, at least, than had they caught fish. However, tend to their nets they must, so they clean them and do any mending that they need.

and other, heh, Roman "vices"

It is a pity and dreadful cowardice when a person sacrifices the good ancient church customs to please the deluded American denominations just so they won't accuse us of being Roman Catholic! Indeed! Am I to be afraid of a Methodist, who perverts the saving Word, or be ashamed in the matter of my good cause, and not rather rejoice that they can tell by our ceremonies that I do not belong to them?

It is too bad that such entirely different ceremonies prevail in our Synod, and that no liturgy at all has yet been introduced in many congregations. The prejudice especially against the responsive chanting of pastor and congregations is of course still very great with many people—this does not, however, alter the fact that it is very foolish. The pious church father Augustine said, "Qui cantat, bis orat—he who sings prays twice."

This finds its application also in the matter of the liturgy. Why should congregations or individuals in the congregation want to retain their prejudices? How foolish that would be! For first of all it is clear from the words of St. Paul (1 Cor. 14:16) that the congregations of his time had a similar custom. It has been the custom in the Lutheran Church for 250 years. It creates a solemn impression on the Christian mind when one is reminded by the solemnity of the divine service that one is in the house of God, in childlike love to their heavenly Father, also give expression to their joy in such a lovely manner.

Whenever the divine service once again follows the old Evangelical-Lutheran agendas (or church books), it seems that many raise a great cry that it is "Roman Catholic": "Roman Catholic" when the pastor chants "The Lord be with you" and the congregation responds by chanting "and with thy spirit"; "Roman Catholic" when the pastor chants the collect and the blessing and the people respond with a chanted "Amen." Even the simplest Christian can respond to this outcry: "Prove to me that this chanting is contrary to the Word of God, then I too will call it 'Roman Catholic' and have nothing more to do with it. However, you cannot prove this to me."

If you insist upon calling every element in the divine service "Romish" that has been used by the Roman Catholic Church, it must follow that the reading of the Epistle and Gospel is also "Romish." Indeed, it is mischief to sing or preach in church, for the Roman Church has done this also...Those who cry out should remember that the Roman Catholic Church possesses every beautiful song of the old orthodox church. The chants and antiphons and responses were brought into the church long before the false teachings of Rome crept in. This Christian Church since the beginning, even in the Old Testament, has derived great joy from chanting...For more than 1700 years orthodox Christians have participated joyfully in the divine service. Should we, today, carry on by saying that such joyful participation is "Roman Catholic"? God forbid! Therefore, as we continue to hold and to restore our wonderful divine services in places where they have been forgotten, let us boldly confess that our worship forms do not tie us with the modern sects or with the church of Rome; rather, they join us to the one, holy Christian Church that is as old as the world and is built on the foundation of the apostles and prophets.

I find myself in a good position that my people love chanting (and all things Lutheran). I am fortunate that they love my chanting.

In the name of the Father and of the + Son and of the Holy Spirit. Amen.
No Audio
recorder didn't record

See the back of the Lord, Jesus Christ. See the marks left by the cane and cat-of-nine-tails; the scars left by His torturers. See the deep gashes and cuts and scrapes made by the wooden beam that He carried, if only part of the way.

Oh, What a Day

What a Good Day

I got to do something today I have been wanting to do for as long as I have been in the ministry. At both places previous to this current location I have pleaded with my people to let me do this.

Resurrection of Our Lord

The day was getting late, so the people asked Pilate to have the legs of the three men broken so that they would die faster, so that they would die before the Sabbath. The two criminals on either side of Jesus have their legs broken, but the soldiers find Jesus already dead. His bones they did not break. To confirm that He was dead, one took a spear and pierced His side, and at once, blood and water came forth.

He's dead. He's brought down from the cross. He's covered in spices and oils and wrapped in linen cloths. He's put into a tomb in which no one had yet been buried. A stone is placed in front of the entrance to the tomb. The deed is done.

a meditation on the seven last words

A Psalm for Good Friday