A crowd had gathered around Jesus, and I suppose many a sermon could begin that way. But, once again, a crowd had gathered. Among this crowd were deriders and those who sought to sully Jesus' reputation—Pharisees and their disciples, scribes and teachers of the law, perhaps some Sadducees. Never letting a situation go without some instruction—these are his people after all, the ones created through Him, the ones He was sent to—Jesus talks to the crowd assembled. He instructs, and some believe. To them that believe in Him He says, "If you abide in My word, you are My disciples indeed. And you shall know the truth, and the truth shall make you free."

Before our Gospel lesson begins, Thaddaeus, one of the twelve, asks Jesus a question: "Lord, how is it that You will manifest Yourself to us, and not to the world?" Then, as we heard earlier, Jesus gives His response:

If anyone loves Me, he will keep My word; and My Father will love him, and We will come to him and make Our home with him. He who does not love Me does not keep My words; and the word which you hear is not Mine but the Father's who sent Me. These things I have spoken to you while being present with you. But the Helper, the Holy Spirit, whom the Father will send in My name, He will teach you all things, and bring to your remembrance all things that I said to you. Peace I leave with you, My peace I give to you; not as the world gives do I give to you. Let not your heart be troubled, neither let it be afraid. You have heard Me say to you, "I am going away and coming back to you." If you loved Me, you would rejoice because I said, "I am going to the Father," for My Father is greater than I. And now I have told you before it comes, that when it does come to pass, you may believe.

I Guess It Has To Happen Everywhere

In South Dakota, they were just plain stupid. And there was an incident in which one channel's team simply refused to hear the fact and reported what they wanted to report.

In Oregon, there was this one broadcast in which an anchor cited a statistic of 50%, to which the co-anchor retorted, "That's about half." (No, that's exactly half, no "about" about it.)

Jesus' time on earth was nearing its end. He was incarnate by the Holy Ghost of the virgin Mary and born in a lowly animal stall. He was wrapped in cloths and placed in a manger, a feeding trough. He was circumcised on the eighth day, as was the custom for Jewish boys, as the law prescribed. He lived as a boy in His step-father's house and spent some time in His Father's house. He grew and took up a trade—carpentry. He went to His cousin, John, and was baptized in the Jordan, and the voice of the Father called out, "You are My beloved Son; in You I am well pleased;" heard again as He was transfigured on a mountain top. He taught, healed, exorcised, and forgave with an other-worldly authority. He celebrated the Passover Meal, renewing the covenant of forgiveness as He says the bread is His body and the wine is His blood. He then sheds that blood and dies in His body on the cross and is buried. "It is finished;" mission accomplished—He has done what He came to do. On the Third Day, He rose triumphant over the grave; death could not hold God, the creator of life!

All of this for you! Hallelujah!

We have before us this morning a text on prayer. Right at the beginning, Jesus tells His disciples, "Most assuredly, I say to you, whatever you ask the Father in My name He will give you." Talking to the Father—asking Him for something—is what prayer is. So, let us begin by dissecting what Jesus says.

Garden of the Gods

A shot looking west into the Garden of the Gods. The snow-covered mountain is Pike's Peak. On the right side, you might be able to make out the Kissing Camels. 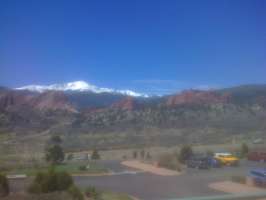 It has been four weeks since we first celebrated the resurrection of our Lord. Given the frail state of the human attention span, that sense of celebration is probably worn pretty thin or gone by now. In this day and age of ever increasing instant gratification we may be thinking that it's time to move on: "Let's get to Pentecost and Holy Trinity. Come on, hurry up and get to Advent and Christmas. Get a move on!"