We...rejoice in the hope of the glory of God.

Jesus has finished talking with Nicodemus—one must be born of water and the Spirit in order to see the kingdom. From there, He goes into the land of Judea and baptizes (though really, His disciples do the baptizing)—He makes of sinners righteous co-heirs who will see with Him the kingdom. But His time in Judea is short, and we are told just before today's Gospel lesson starts that, "He left Judea and departed again to Galilee. But He needed to go through Samaria." (John 4:3-4)

Blessed are those whose lawless deeds are forgiven, And whose sins are covered; Blessed is the man to whom the LORD shall not impute sin.

St. Paul quotes from David in Psalm 32. He says that David is describing the "blessedness of the man to whom God imputes righteousness apart from works." Earlier, St. Paul also described God as one who justifies the ungodly, stating, "Now to him who works, the wages are not counted as grace but as debt. But to him who does not work but believes on Him who justifies the ungodly, his faith is accounted for righteousness..."

What's so Different This Time?

Otherwise, we now have an international coalition butting in to what amounts to a civil war. In the US civil war, Lincoln and Secretary of State Seward requested that foreign governments consider it an internal insurrection that required nor requested foreign involvement (though Southern President Jefferson had hoped that the British would get involved and side with the southern states for lack of cotton). If this is a Libyan civil war, I think it deserves the same respect we requested of other foreign governments during our civil war (and I can recognize the rebels celebrating the recent coalition strikes in Libya, but did they officially ask for that?). Or, could it be that the thirst for oil and rising gas prices has forced the hand of world leaders to get involved (cotton, anyone)?

So, what's so different this time?

Drowned and Brought to Newness of Life

So, get past that bit of me stuttering at the beginning (don't know what came over me), and it was a nice time to have the rite.

Helping the Victims of Calamity

looking for an avenue for your charitable giving

I'm sure many are struck by the disaster in Japan and it's aftermath in Hawaii and along the Americas' Pacific coast. Certainly, there are many fine organizations receiving donations, both financial and other, but the one I would implore you to donate to is the LCMS World Relief and Human Care.

Another Pic of the Three Kiddos

professionally posed, but snapped by me 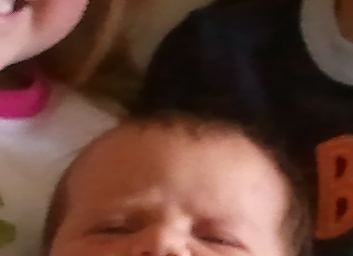 Here the kids meet for the first time. 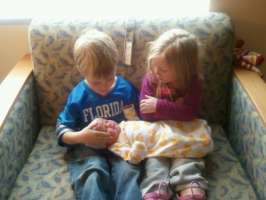 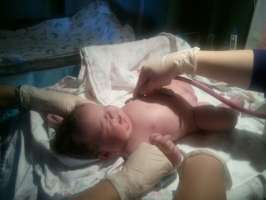