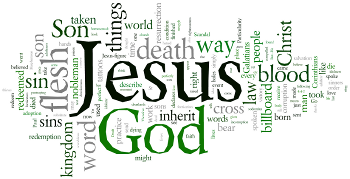 Jesus said to him, “Go your way; your son lives.” So the man believed the word that Jesus spoke to him, and he went his way.

I’m not one who has taken a current event and molded a sermon around it, spare once, following the wildfires last summer. I have mentioned a current event in sermons in connection with the text, but never has an event such as this meshed so well with a text for a Sunday morning.

There is controversy in Texas over a billboard. While it has drawn some supporters, the overwhelming reaction has been outrage. On the billboard is a man portraying Jesus. He is crowned with thorns. His outstretched arms bear hands with holes in them where it would appear there once were nails. Covering the body of the Jesus figure are tattoos. Outcast, addicted, jealous, faithless, and cheat some of them read. It would appear to be a great representation of what Jesus’ death means for you. These tattoos show you that Jesus has taken these conditions and illnesses and struggles—these sins—from you and bore them Himself in His passion and death. Of course, where it falls short is that the nail holes would indicate that this Jesus is a post-resurrection Jesus, and following His resurrection, Jesus would not be carrying the sins of the world in (or on) His flesh.