I spent most of this week in Logan, UT, on the campus of Utah State University for a Higher Things conference with one of my members and his daughter. As anyone who goes to these conferences would tell you, the highlight of each day is the worship services; three the first day (Opening Divine Service, Evening Prayer, and Compline), four each the next two days (Matins, Vespers, Evening Prayer, and Compline), and two the last day (Matins and Closing Divine Service). However, the catechesis and free time activities are something to behold, too. 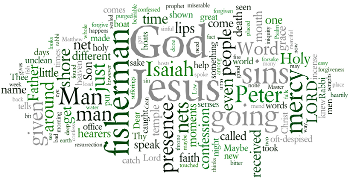 The king had just died, so a man goes to the temple to burn some incense before the LORD to commemorate the king. He knew what to do, he had seen it done many times before. This time, however, something was different. He was sure that the bit of robe that he saw out of the corner of his eye wasn’t there when he first got to the temple. As he looks around, he notices that the surroundings are just a bit different, too.

So, he follows the train that he saw out of the corner of his eye; it keeps going and going and going, filling the temple. It comes to a throne, and seated on the throne was none other than the Lord. In awe, and not quite aware of what’s going on, he looks around and sees six-winged seraphs flying around; with a pair of wings they covered themselves out of modesty—they are in the presence of the Almighty with a man among them—with a pair they covered their faces as was reverent. Flying around, they cried out to each other in one voice, “Holy, holy, holy is the LORD of hosts; The whole earth is full of His glory!” The whole place shook at their cry, and smoke of incense filled it.

Incense...that’s when the man realizes what’s going on; that’s when he comes to his senses. He’s standing in the heavenly temple in the presence of the only, true God, Creator of the universe. The man falls down on the ground, prostrate, face-down. “Woe is me, for I am undone! Because I am a man of unclean lips, And I dwell in the midst of a people of unclean lips; For my eyes have seen the King, The LORD of hosts.” (cf. Isaiah 6:1-5)

Dear hearers, this confession did not come to him from himself. He received it by faith as it was given to him by the Father in whose presence he found himself.

However, Friday is where something out-of-the ordinary happened. We made our way to Golden to pick up an in-window air condition unit. It’s a little something to keep the living room comfortable on extremely hot days, at the hottest time of the day. I’m amazed at how such a small unit really helps, but then, we do have a small living room.

Then, it was back to normal after that. Bible Study in the evening.

Saturday was spent preparing for a trip to Utah on Monday. That day, two members and I spend the week at Logan—Utah State University—for a Higher Things youth conference.

It was a short week in one regard, but it ended on a bang. 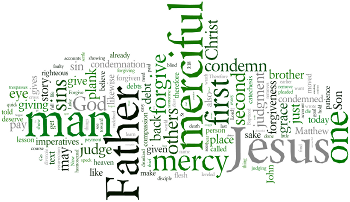 There was once a story told of a man who was in a great deal of debt to another man. The second man called the first to pay up, to settle his accounts. Sadly, the first man was unable to pay off his debts, so the second man wanted to sue the first, sell all he had, and collect his debt that way—he sought to ruin the first man. This man pleaded for mercy, “Have patience with me, and I will pay you all.” Moved with compassion, the second man released the first and forgave all of his debts.

It’s nice to have a week that is back to “normal.” I was able to be in the office every work day this week. I was able to get to Bible Study on Thursday morning. The regular weekday classes were held this week. It was quite a contrast from last week. Oh, and there was Cow Appreciation Day.

There are a lot of deer in Elizabeth. The Town just approved a plan that will allow hunters to thin the herd. As part of the report on this news, the Denver CBS station filmed some of the deer in front of our house. 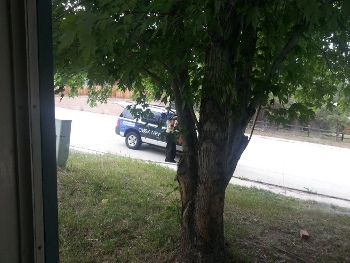 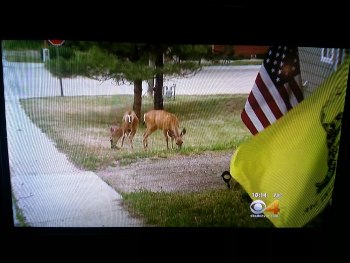 I’m going to do a short entry this week.

It was the usual far on Sunday and Monday. I was told that Sunday’s sermon was the best I had ever preached there. My first thought was that the sermon from Mid-week Lent was better, but then I remembered that the person who told me that is one who either cannot or does not come to the Mid-week services. And Monday was a day off like any other.

The week, however, was dominated by a hospital stay for Genevieve. Intestinal problems came to a head—coeliac flare up and perhaps some Crohn’s combined to “twist” a length. Some medications later, and they problem resolved itself, but she spent two nights in the hospital, Wednesday and Thursday. She was able to get home in time Friday for us to enjoy our own fireworks. Consequently, I didn’t have much time in the office, there was no Wednesday evening study, and I didn’t make it to Thursday morning Bible Study. So, this coming Sunday’s sermon is a borrow as I had no time to develop an idea that I came up with on Tuesday.