As the travelers stooped into the house, they presented their gifts to the Child. Among the gifts were gold and frankincense. The gold the family likely used to flee into and survive in Egypt. Apart from knowing that these men were guided to the Child by God Himself, it would seem that the gift of gold was fortuitous. They received the money they would need to flee a tyrant’s blade and stay in that country long enough to outlive the tyrant. Frankincense is the perfume burned in deference to a god—here, the travelers give the gift to God-in-the-Flesh.

There was one last gift: myrrh. Myrrh is one of the perfumes used to prepare a body for burial. Wrapped in linen and spiced with myrrh and cassia and aloes (cf. Psalm 45:8), the body would be placed in the tomb perhaps more pleasantly fragrant than he had been in life. It was a ritual performed in mourning to honor the dead. After the wise men visit, God-in-the-flesh is about to flee into Egypt; the gold and frankincense make sense. (cf. Matthew 2:1-12)

It is clear from this that you have no influence over who God is or what He does.

The question begs to be asked, “Who are the real blind people?”

Dear hearers, what follows today is adapted from a sermon by Martin Luther, with some revision.

This parable speaks of the disciples and the fruits, which the Word of God develops in the world. It does not speak of the law nor of human institutions; but, as Christ himself says, of the Word of God, which He Himself the sower preaches. The law bears no fruit, just as little as do the institutions of men. In the parable, Jesus tells of four kinds of disciples of the divine Word and their fruit.

The Sacrament of the Altar

a quote from Martin Luther

Some certain congregations in my past could do well to read this and question their practice or label:

People now regard the holy sacrament of the body and blood of our Lord so lightly and assume an attitude toward it as if there were nothing on earth which they needed less than just this sacrament; and yet they want to be called Christians. They imagine, because they have now become free from papal coercion, that they are no longer obligated to use this sacrament but may well do without it and freely despise it without sinning at all. And if this sacrament were never used or were lost, it would not matter to them.
Martin Luther, "Admonition Concerning the Sacrament of the Body and Blood of our Lord" 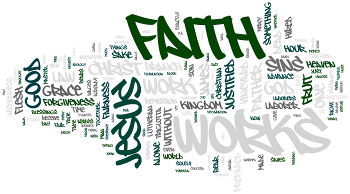 It’s a good thing that God does not deal with you out of a sense of fairness. If that were the case, it’s a safe bet to assume that no one would be here, that He would have smote everyone long ago. The world would be a desolate place, and hell would be overcrowded.

No, you still live, not because God is fair, but because He is just, merciful, and gracious. You know that. You can sit there and recite it left and right. You believe it with all of your heart. But there is still a constant nagging voice in the back of your head that says it is unfair that God would treat and gift the newest Christian the same as He would you—that the newest Lutheran has the same standing before God as you who have been a Lutheran since the day you were baptized as an infant. The Father is completely indifferent to whether or not you were born into the faith or baptized when you were in your eighties; thief on the cross or apostle; Saul or Luke; early morning, third hour, sixth hour, ninth hour, or eleventh hour. It just isn’t fair.

Yet, this unfairness is exactly what the kingdom of heaven is like. This says more about the King of heaven than the kingdom, as the master in the parable even says, “I wish to give to this last man the same as to you. Is it not lawful for me to do what I wish with my own things?” The master can do whatever He pleases with His own things, even if that seems unfair to you.

I could end the sermon right there. It would make for my shortest sermon ever, at about half a page. But there was something about this text that was brought to my attention which is often overlooked. No matter when the laborers were hired, they worked.