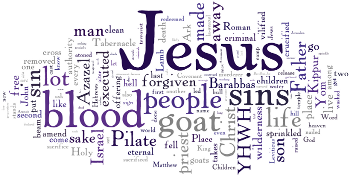 Yom Kippur had arrived—the Day of Atonement. The priest made the usual preparations. He washed and put on the holy garments. He sacrificed a bull as a sin offering for himself and his house so he could enter the Most Holy Place of the Tabernacle. He also takes two goats from the congregation of the children of Israel and presents them before YHWH at the door of the Tabernacle. The priest then casts lots over the goats; one lot falls for YHWH, the other for Azazel. (cf. Leviticus 16:1-8)

So it has begun. Of course, the beginning of Christ’s Passion started the day before the events of tonight’s text, though it most certainly has roots in the fall of Adam, and it was known to happen before the foundation of the world. But on this night, Jesus stands before the council, and He is put on trial. To this point, however, your place in His Passion may have been difficult to see.

Jehovah Jireh has provided. As it is written, “In the Mount of the LORD it shall be provided.” (Genesis 22:14b) The hand was stayed, the sacrifice prevented, and caught in the thicket was a ram to take the place of the boy. Vicariously, the ram is sacrificed, and the boy lives. There was much rejoicing of the two that day as they made their way down the mountain.

Jehovah Jireh has provided. The people had been freed from oppression and slavery. They were allowed to leave and go into the wilderness to sacrifice and freely worship YHWH, though they were pursued for a time. The LORD had provided freedom, but His provision didn’t end there as He provided bread from heaven, manna, and quail—flakes of sustenance and meat from the throne of the Almighty. Surely, there was much rejoicing as the people left the land, as Pharaoh and his host drowned in the sea, as they gathered the bread the first few times.

Jehovah Jireh has provided. On a mountain across the Sea of Galilee Jesus had retreated to find some solitude, but a multitude followed Him. Jesus had taught them for a few days, and they followed Him because of the great miracles He had performed. They were hungry by this point, and it was too late to send them home, so Jesus asks, “Where shall we buy bread, that these may eat?” Their coffers couldn’t supply what was needed, but there was a boy with five barley loaves and two small fish, “But what are they among so many?” The answer is a banquet at the hands of Jesus, with more leftovers than when they had started. There was much rejoicing that night as the people were fed with bread from One from heaven.

The prophets Jeremiah and Ezekiel had spoken against the shepherds of Israel and Judah. These men—prophets, priests, and kings—whom God had set up to lead His people, care for them, feed them with His Word were not seeing to the tasks to which He had sent them. So He declares woe upon them.

Woe to the shepherds of Israel who feed themselves! Should not the shepherds feed the flocks? You eat the fat and clothe yourselves with the wool; you slaughter the fatlings, but you do not feed the flock. The weak you have not strengthened, nor have you healed those who were sick, nor bound up the broken, nor brought back what was driven away, nor sought what was lost; but with force and cruelty you have ruled them. (Ezekiel 34:2b-4)

Because they have done this, God declares that He will be their shepherd. (cf. Ezekiel 34:23; Micah 5:2) In a stable outside the little town of Bethlehem, that Shepherd is born. Conceived by the Holy Ghost and born of the Virgin Mary, Jesus is God-with-us, the Shepherd promised of old. He is the one who will fulfill the promise made through the prophet Ezekiel:

“Indeed I Myself will search for My sheep and seek them out. As a shepherd seeks out his flock on the day he is among his scattered sheep, so will I seek out My sheep and deliver them from all the places where they were scattered on a cloudy and dark day. And I will bring them out from the peoples and gather them from the countries, and will bring them to their own land; I will feed them on the mountains of Israel, in the valleys and in all the inhabited places of the country. I will feed them in good pasture, and their fold shall be on the high mountains of Israel. There they shall lie down in a good fold and feed in rich pasture on the mountains of Israel. I will feed My flock, and I will make them lie down," says the Lord GOD. “I will seek what was lost and bring back what was driven away, bind up the broken and strengthen what was sick; but I will destroy the fat and the strong, and feed them in judgment.” (Ezekiel 34:11-16)

It must have been an interesting day. Things happened that day that had never happened before. I know, that sounds a bit loaded; new things happen every day. But this day was...different.

The whole assembly of the Israelites had gathered lambs to slaughter them. The Israelites were great in number, and each family had a lamb to slaughter, or one to share with another small family. At the same time, in all of Goshen, the throats of the lambs were slit, and the blood was used to cover the lintel and doorposts of their houses.