What if the parable of the Samaritan and the traveler isn’t all we make it out to be?

It’s a simple story, really. It tells a moral tale. A certain man was traveling to Jericho. Along the road, some thieves stripped him of his clothing, beat him senseless, and left him for dead, naked, alone, and broke. Two of Jerusalem’s religious elite pass by him. Neither of them helped him, but did their best to avoid the man by walking around him on the other side of the road. It wasn’t until a Samaritan came along—a half-breed lowlife, according to the Jews—that the man finally received some help.

This certain Samaritan bandaged the man’s wounds, salving him with wine and oil. Then, placing him on his own animal, he takes the man to an inn, pays for his room and board, and sees to it that the innkeeper takes care of him, promising to repay him any extra expenses upon his return. It was certainly a good thing that the Samaritan had done, but you’ll notice that nowhere in the parable does Jesus call him good, as has become part of our parlance—the Good Samaritan.

Prayer Service of Remembrance for Victims of Abortion 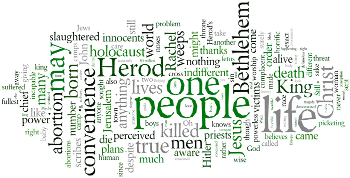 Matters of convenience have long trumped life. Throughout the history of the world, whenever it suited the desires and perceived needs of a person, he or she has had no problem taking a life. And the people around them? Well, they have often been complacent or incapable of doing anything different.

As was usually the case, you might imagine that the Pharisees left Jesus dejected after He had told them the parable that is today’s text, if not angry and ready to stone Him. It’s a simple parable, yet if they did walk away dejected, one that they got so wrong. Nevertheless, be it simple, it’s one that you can easily get wrong, too.

The prophet Jeremiah was called at a young age to warn the people of Judah of danger coming from the north and east. God’s wrath would come upon His people via the Babylonians. As Jeremiah warned them, however, he told them that a remnant would remain. Consequently, the message to the people of Judah was to repent. Repent, and they would be counted among the remnant—they would be the remnant.