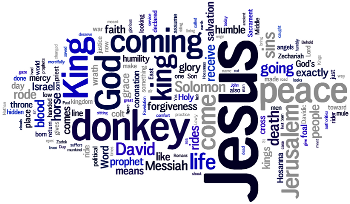 Is that any way for a king to make an entrance? Perhaps it is for a king in the line of David. As David neared death, his eldest living son, Adonijah, decided to declare himself king. But David was reminded of his promise to name Solomon his successor. So the elderly king declared,

Call to me Zadok the priest, Nathan the prophet, and Benaiah the son of Jehoiada. Take with you the servants of your lord, and have Solomon my son ride on my own mule, and take him down to Gihon. There let Zadok the priest and Nathan the prophet anoint him king over Israel; and blow the horn, and say, “Long live King Solomon!” Then you shall come up after him, and he shall come and sit on my throne, and he shall be king in my place. For I have appointed him to be ruler over Israel and Judah. (1 Kings 1:32-35)

The priest and prophet did as the king commanded. Solomon rode to his coronation on a donkey—a mule, the translation says. These words are repeated two more times in 1 Kings, underscoring the importance of the event, not only of Solomon’s coronation, but also, as some speculate, Solomon’s ride upon a donkey. Though there is no other textual evidence of the practice, they assume that all of the kings in David’s line rode to their coronations upon a donkey or mule, as if to connect themselves and their reigns with David and Solomon beyond their blood succession. 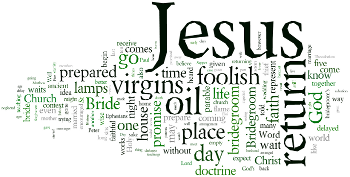 It’s the parable of the ten virgins. Five of them were wise, and five were foolish. They had gone to the house of the bridegroom to celebrate his wedding, but he was delayed in returning. This is what distinguished the wise virgins from the foolish: the wise had oil in their lamps to last through the wait, the foolish had none.

On the outset, it seems a silly example. Who goes out into the night, not expecting to be back home soon, without oil for their lamps? That’s like hopping onto the interstate for a long road trip with your gas tank near empty. That’s like trying to use your computer, tablet, or phone to watch a movie with almost no charge left on your battery. That’s like trying to do your day’s work without having eaten breakfast and without eating lunch—on an empty stomach. Well, for the sake of what Jesus was trying to teach, that’s exactly what five of the virgins did. They went to wait for the bridegroom to return without bringing enough oil for their lamps. No one could be that foolish, right?

“When the Son of Man comes in His glory, and all the holy angels with Him, then He will sit on the throne of His glory. All the nations will be gathered before Him, and He will separate them one from another, as a shepherd divides his sheep from the goats.” This text can be one of great terror for you or one of great comfort. It all depends on how you hear it. And how you hear it depends on whether you are a sheep or a goat.

For, when Jesus returns on the Day of Judgment, all people will be divided before him, like sheep and goats. Jesus will welcome the sheep on His right into everlasting life. The goats on His left, on the other hand, will be commanded to depart from His presence into everlasting fire.

In 168BC, the Seleucid king Antiochus Epiphanes IV led an attack on Egypt. He was one in a line of kings who ruled a third of the empire that Alexander the Great had created; after his death, his empire was split into smaller kingdoms, one of which was ruled by the Seleucids. Anyway, Antiochus was blocked before entering Alexandria by a single Roman envoy. This envoy, drew a line in the sand, encircling Antiochus, and warned him that if he crossed the line without a pledge to withdraw from Egypt and Cyprus, he was effectively declaring war on Rome. Antiochus decided to withdraw.

Additionally, Antiochus outlawed the Jewish religion and rituals. He set up a statue of Zeus in the temple and sacrificed swine on the altar. So was fulfilled the words of the prophet Daniel: “And from the time that the daily sacrifice is taken away, and the abomination of desolation is set up, there shall be one thousand two hundred and ninety days.” (Daniel 12:11) The right sacrifices were taken away and an abominable sacrifice set up in their places. It was the abomination of desolation. For this reason, many equate Antiochus with the eleventh horn on the beast of Daniel’s prophecy. 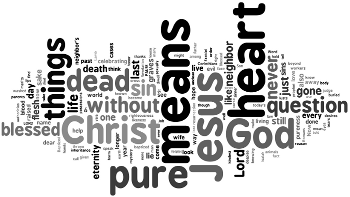 A fact of life in this, our little congregation, is that there are very few funerals. Since I have been here, I’ve only buried two, though we’ve lost three. As is usually customary on this day in our churches, we like to commemorate our blessed dead from the past year, and thank God for the life that they were given, both here on earth and in eternity in Christ. But we have had none this past year.

So, we count all of our blessed dead among the many. And we rejoice with St. Job that, like him, they will see God. (cf. Job 19:26-27) With their own eyes they will look upon the face of God and live! Sin is gone, done away with, for the sake of Jesus Christ, the Son of God. They have all passed from this vale of tears and sorrows, from death to life, from this temporal existence to eternity.