A New (to me) Computer Means a New Category

About three weeks ago, I walk into my office to see a note and a white object under it on my desk. "Dear Pastor, I found this cheap at a thrift store," the note read (or something like that). "If you can get it to work, it's yours." Under the note was a late-2009 model 13" MacBook.

Resurrection of Our Lord

The women went to the tomb, supposing to spice the body of Jesus since they had little time to do it before the Sabbath. They wondered about the stone. They likely worried about the Roman guard. They were surprised to see the stone rolled away and the tomb empty, like it had been before Jesus was laid to rest there; it was, after all, a new tomb—no one else had been buried there yet. However, the tomb was not totally empty; a young man was sitting inside, waiting just for them. He proclaimed,

Do not be alarmed. You seek Jesus of Nazareth, who was crucified. He is risen! He is not here. See the place where they laid Him. But go, tell His disciples—and Peter—that He is going before you into Galilee; there you will see Him, as He said to you.

What good news. “He is risen! He is not here. See the place where they laid Him.” The stone is rolled away, granting the women access to the empty tomb. Where once there was death, now they see the absence of death and hear the proclamation of life from an angel of God. Luke reports that the angels even told the women, “Why do you seek the living among the dead?” (Luke 24:5) Jesus is alive, which means that He who once was dead has conquered death. He is risen! Hallelujah!

"It is finished!" and "Father, 'into Your hands I commit my spirit.'" 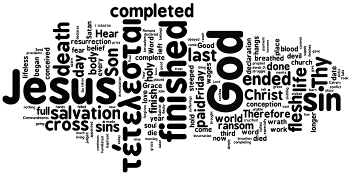 The lifeless body of God hangs on the cross. It was a short life of about 33 years for the eternal Word. “The Word of God became flesh and dwelt among us.” (John 1:14) Humbly, the Son of God began His fleshy existence in a house when Gabriel visited Mary; gloriously, it reaches its conclusion on a hill outside of Jerusalem called Calvary. How appropriate that today, March 25, is not only Good Friday this year, but also the Annunciation—the day when the church acknowledges the Incarnation of Our Lord. It’s an ancient church belief that a prophet died on the day He was conceived, and this year, that belief plays out as the date of honoring His death falls on the date of observing His conception. The Son of God took on human flesh and blood in order to give that flesh and blood over to death—the living God finishes His mission, breathes His last, and dies.

At the third hour on a Friday morning, Jesus the Christ, the Son of God, saw to His appointed duty to die for the sin of the world, and was nailed to a cross. In the matter of a few hours, it was done—it was finished. Satan was humiliated, brought low, his head crushed by the bruised heal of the Seed, declared in one last word from the cross: τέτελεσται. One little word has felled the devil, and we translate it as “It is finished,” or, “It is completed,” or, “It is ended.”

Palmarum - The Sunday of the Passion 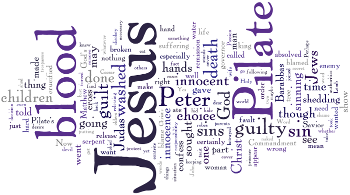 The Passion according to St. Matthew as you have heard it today begins with Jesus before the governor. There, He is on trial for no other reason than because the Jews want Him killed, and they cannot legally do that themselves. He stands before Pilate on some trumped up charge, that He claims to be a king, and if He is a king, then He stands in opposition to Caesar and is an enemy of the state. “Are you the King of the Jews?” “It is as you say.”

Now, the governor must decide how to proceed. The chief priests and elders pressed Pilate, further accusing Jesus, and the King says nothing. Pilate marveled at Him for this. This was not how a Jewish king would respond to their accusations. This is not how an enemy of Rome would behave. He figured that something more was going on. Then he has a brilliant idea: He’ll give the people a choice between a known evil man and Jesus.

Now at the feast the governor was accustomed to releasing to the multitude one prisoner whom they wished. And at that time they had a notorious prisoner called Barabbas. Therefore, when they had gathered together, Pilate said to them, “Whom do you want me to release to you? Barabbas, or Jesus who is called Christ?” For he knew that they had handed Him over because of envy.

The choice should be obvious—it would be more dangerous to release Barabbas; they just have to pick Jesus. But what do they shout? “Barabbas!” “What shall I do with Jesus who is called Christ?” “Let Him be crucified!”

When Jesus preached on the mount, He said, “Blessed are those who hunger and thirst for righteousness, For they shall be filled.” (Matthew 5:6) This evening, you heard Him cry out from the cross, “I thirst!” For what does Jesus thirst?

According to John, He said it to fulfill the Scripture. Many point to Psalm 69, wherein the Psalmist bemoans the fact that his enemies outnumber the hairs on his head. (cf. Psalm 69:4a) But it also says that “they” have given him gall for food and vinegar to drink. (cf. Psalm 69:21) Finding a hyssop branch, they filled a sponge with sour wine, put it on the branch, and placed it on Jesus’ lips. And so were the words of Psalm 69 fulfilled.

“[A]bout the ninth hour Jesus cried out with a loud voice, saying, ‘Eli, Eli, lama sabachthani?’ that is, ‘My God, My God, why have You forsaken Me?’” It’s a strange question for a Man who is God to ask. If the Son and the Father are truly of the same essence, with the Holy Ghost, then why is the Son asking this question. One must conclude that He is asking it from His human nature.

At the point in time of tonight’s text, the wedding vows are being spoken. True, it doesn’t sound like, “I take you to be my wedded wife, to have and to hold from this day forward, for better, for worse, for richer, for poorer, in sickness and in health, to love and to cherish,” et cetera, but in this last word, “Woman, behold your son,” and “Behold your mother,” Jesus is leaving His mother to be joined to His bride. Next week, the vows will be complete as Jesus cries out the word by which indicates the leaving of His Father; but there is more to that word that simply leaving Father.

And there is also more to this third word, too. From a purely cultural view, Jesus is probably His mother’s caretaker at this point. When Mary was very young and with child by the Holy Spirit, she married Joseph, who was likely considerably older than her. Therefore, some 33 years later, as Jesus hangs on the cross dying, that Joseph had already died, and the task of caring for Mary fell to her oldest Son, Jesus. Now, Jesus is dying, and He makes sure that Mary is cared for. As much as Jesus is substitute for mankind on the cross, now John, the young disciple, becomes the substitute son in Jesus’ place, and he is given the task of caring for the Mother of God. It’s the work of a loving son; of course Jesus would look out for His own mother in this way.

“Jesus, loving to the end / Her whose heart Thy sorrows rend, / And Thy dearest human friend: / Hear us, holy Jesus.”