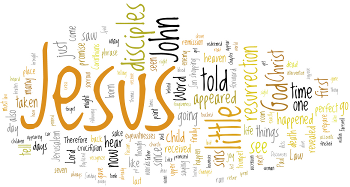 In the name of the Father and of the + Son and of the Holy Spirit. Amen.
Download PDF

In what has been a journey in reverse since Quasimodo Geniti—that is, moving from the resurrection to times before the crucifixion—we’ve moved forward from John 10 to 16. The section that chapter 16 falls in is known as the “Farewell Discourses.” Jesus had celebrated the Last Supper, though John hardly mentions it; he just gives you a little foot washing and A New Commandment. (cf. John 13:34) From then on, Jesus was preparing His disciples for His departure, for His crucifixion. Today’s text is right in the middle of it all. There, He says, “A little while, and you will not see Me; and again a little while, and you will see Me, because I go to the Father.”

Of course He’s good; He’s God, and that makes Him good. But what makes Jesus the good shepherd? Precisely that second sentence: “The good shepherd gives His life for the sheep.”

Hey, Look What I Can Do

So, yesterday the PlayStation 4 received a new firmware. This firmware has a feature, among others, that can let a player do so remotely using a Windows 8.1 or above or Mac OSX Yosemite or above computer. There's an app that I downloaded to my Mac which I then connected to my PS4. Hook up a controller via USB to the Mac, and right on my computer's screen is the game I'm playing. It works pretty good—a little better than the same function on the PSVita, I would say.

“You shall not give false testimony against your neighbor.” “We should fear and love God so that we do not tell lies about our neighbor, betray him, slander him, or hurt his reputation, but defend him, speak well of him, and explain everything in the kindest way.”

Over the centuries since the early church, St. Thomas has gotten a bit of a bum rap. No longer is he referred to as the Twin, as the Scriptures label him, but as the Doubter—Doubting Thomas. Now, it certainly isn’t a lie to say that he doubted; today’s text illustrates for you one such time when that was the case, and it is this text which has led the church these days to call him the Doubter. But what does such a label and name make of his reputation? He is now known as the Doubter, and people think the lesser of him compared to the other apostles, and especially in comparison to themselves. His reputation has been hurt, it’s borderline slanderous, and as a result, few speak well of him or explain things in the kindest way.

Consequently, you have been more than a little unfair in calling Thomas the Doubter. If you are going to be honest, he was not asking for anything more than the other apostles had already received. Jesus appeared to the 10 of them the evening of the Resurrection. He speaks peace to them who had been shut up in that room with the doors locked for fear of the Jews. It wasn’t until He proved to them that He was really Jesus, by showing them His hands and side, that they were glad to see Him.