So, I've been sitting on this month's sermons for a little while, some longer than others, obviously. They have now been posted to the site. You'll find them all listed in the menu bar if you hover over the word "Sermons." These four will be listed there for 30 days from the set posting date, which for the first one, Rogate, is May 1 (so only a few more days). 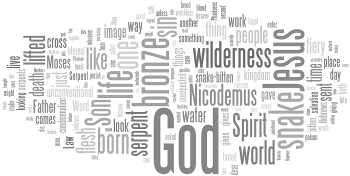 In the wilderness, as the Hebrews made their way from Egypt to Canaan, the people grumbled against God and Moses. They had grown discouraged in their trek, for they had already spent a long time in the wilderness, away from what they, at that point, thought was a life of comfort, making bricks without straw, working in unbearable conditions, and beaten or killed for their inability to work and meet their quotas. But, compared to where they were in their exodus, they did have some comforts, like better and tastier foods, and at least, again, as they perceived it, had a chance to live. On top of that, they lived in the best part of Egypt, not the barren wilderness they were in. “Why have you brought us up out of Egypt to die in the wilderness? For there is no food and no water, and our soul loathes this worthless bread.” (Number 21:5)

There were God’s people, rescued from slavery, being brought into their own land, incapable of trusting in Him who saved them. And to top it all off, they called the bread that He sent them worthless! What’s an almighty and just God to do? Well, point out their sin to them, of course. So, He sent fiery serpents—seraphim, it says in the Hebrew, a word for fiery or venomous ones—into the camp; they bit the people, and many of them died. (cf. Number 21:6)

The people realized the error of their ways. They approached Moses and confessed their sin to him. They asked him for a way to make the death by serpents stop. “We have sinned, for we have spoken against the LORD and against you; pray to the LORD that He take away the serpents from us.” (Numbers 21:7) This is the work of the Law: it reveals the wrath of God to you; it kills you—when you sin against God, it declares to you that the just punishment for your sin is death. The fiery serpents were the proclamation of God’s wrath against the sin of the Hebrew children in the wilderness.

No one likes going to the dentist—at least, no one that I’ve met. However, there are those times when you must go. There’s a sharp pain when you chew; it’s the tell-tale sign of a cavity. So, you have to go have it filled. You make the appointment, and it just happens that they can get you in that afternoon. The sooner the better, right? Get it over with, right? Still, your anxiety goes through the roof as you arrive at the office, are ushered to the back, and wait in the chair for what feels like hours. Finally, the dentist comes in, and begins the procedure. First, a pinch as you receive an injection of Novocain. Then, your heart rate spikes, especially as you hear the whining of the drill.

But, the cavity is being filled and you know that whatever unpleasantness you’re experiencing now is only temporary. Once all is said and done, at least today, the pain will be gone, both from the procedure and, as is the point of having the cavity filled, when you eat.

“And He led them out as far as Bethany, and He lifted up His hands and blessed them. Now it came to pass, while He blessed them, that He was parted from them and carried up into heaven. And they worshiped Him, and returned to Jerusalem with great joy, and were continually in the temple praising and blessing God.”

After going before His disciples into Galilee (cf. Matthew 26:32; 28:7), and appearing to many, many people, giving them many infallible proofs of His resurrection (cf. Acts 1:3), Jesus leads His disciples through Jerusalem to Bethany to be received into heaven there before them. Christ’s ascension does not happen in Galilee, which served as something of their home base during His three-year ministry, but just outside of Jerusalem. They had been there a mere 40 days previous where they had witnessed His passion, suffering, and death, and where He had risen from the dead.

These “flashbacks” in John 16 have been happening for the last three weeks, today included. At this point in St. John’s Gospel, it’s the day of Jesus’ betrayal into the hands of the elders, chief priests, and scribes; He celebrated His last supper with His disciples back in chapter 13, and in chapter 18 Judas brings the Temple guard to arrest Him. Between these two events, Jesus is preparing His disciples for the time that He will no longer be with them and His church as He had in the three or so years since His baptism. While He will soon be taken from them to be crucified and die for their sins and the sins of the world and on the third day rise again—events which on a few occasions He had told them would happen—there’s something different about these sayings of Jesus, about His telling the disciples that He is going away.

“A little while, and you will not see Me; and again a little while, and you will see Me, because I go to the Father.” (John 16:16) “It is to your advantage that I go away; for if I do not go away, the Helper will not come to you; but if I depart, I will send Him to you.” (John 16:7) “He will glorify Me, for He will take of what is Mine and declare it to you.” (John 16:14) “Therefore you now have sorrow; but I will see you again and your heart will rejoice, and your joy no one will take from you. And in that day you will ask Me nothing. Most assuredly, I say to you, whatever you ask the Father in My name He will give you. Until now you have asked nothing in My name. Ask, and you will receive, that your joy may be full.” (John 16:22ff)