“And behold, a certain lawyer stood up and tested [Jesus], saying, ‘Teacher, what shall I do to inherit eternal life?’” That’s an interesting question, isn’t it? It isn’t the only time Jesus is asked the question. If you ask two of our catechumens the question, they may give you the answer, since we talked about that just about one year ago—it won’t be the one Jesus gave, because He saw right through the question to what those who were asking really wanted.

What Jesus does in today’s text is very indicative of St. Mark’s Gospel. There’s no soft and sweet beginning to his Gospel, no angel choirs, no lineage, none of those “tedious” details. In fact, there is no softness at all throughout the Gospel. No 12-year old Jesus causing Mary to marvel, in fact, no sweet Mary at all. No, for Mark, his point is to get to the meat of the story of Christ, so the first thing he does is introduce John the Baptist. Then, Jesus arrives on the scene and is baptized. Immediately, Mark’s favorite word, Jesus makes His way into the wilderness to be tempted by the devil.

The same kind of thing is happening in today’s pericope. Jesus is making His way to the Sea of Galilee when a deaf man with a speech impediment is brought to Him. Jesus pulls him aside, puts His fingers in the man’s ears, spits, touches the man’s tongue, and shouts, “Ephphatha,” “Be opened!” Immediately (see, I told you Mark likes this word), the man could hear and speak. 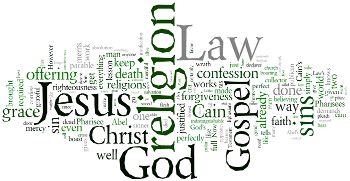 I’m going to say it again: there are only two religions in the world. If it’s been a while since you’ve heard me say that, you may be surprised to hear it. After all, there are multiple -isms and -anities out there, and it’s impossible to keep them all straight. Volumes have been written which only give synopses of the world’s many religions. However, when you get to the core tenets and facets of these world religions, they fall only into two types of religions. In many ways, they are polar opposites, yet they can be indistinguishable in many instances. And while the religions are polar opposites, the core tenets are, for all intents and purposes, complementary. Today’s Old Testament and Gospel lessons show the two religions at work.