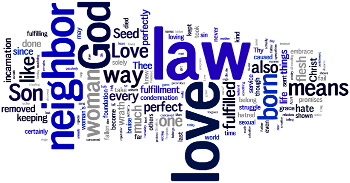 “Love is the fulfillment of the law,” the Apostle wrote.

Now, as you initially hear that, your mind should bring you to the idea that part of keeping the law is the love of your neighbor. You’re not wrong. The last seven commandments all tell you how to love your neighbor as yourself.

“These are the ones who come out of the great tribulation, and washed their robes and made them white in the blood of the Lamb.”

Dear saints of Christ Our Savior and guests, friends and family of Doris, Julie and Stanley...the beatific vision which the apostle St. John was privileged to see, the host arrayed in white, was of a time beyond time, the Church Triumphant in bright array, a multitude which no one could count at the Feast of the Lamb in His kingdom which has no end. It’s the life eternal to which all who in Christ aspire, and that to which our dearly departed Doris is but one step closer.

She now rests from all of her labors. She is now gone out from the great tribulation, this existence in the Vale of Tears in which you still live, battered about, as it were, by every care and concern, worry and anxiety that befalls man in his corrupt state. Chaos reigns here. Brother strives against brother, which you hear about from Cain and Abel, and see throughout history and into today. All manner of evil is spoken against you who are in Christ for the mere fact that you are in Christ. 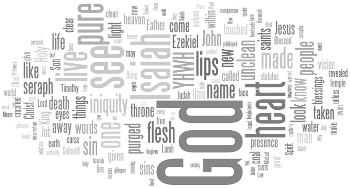 In the year that King Uzziah of Judah died, St. Isaiah had a vision of the Most Holy Place in the courts of heaven. The Lord was sitting on a throne, high and lifted up, and the train of His robe filled the temple. There were angels standing above the throne—six-winged seraphs—covering themselves with two pairs of wings out of respect and modesty, being in the presence of YHWH Sabaoth. They cried to each other antiphonally words from which the Sanctus is derived, and the place shook for the sound of their cries while the smoke of incense filled the temple.

St. Isaiah was privileged to get a glimpse of heavenly worship. You can say with confidence that he didn’t see everything that happened in the Most Holy Place, and what he revealed might only be but a portion of what he was given to see. The sights, sounds, smells, and feelings of everything going on must have been more than he could understand; I would wager even the taste of things happening was palpable and more wonderful than anything he had ever experienced below. Once the wonder of the scene catches up to him, though, he realizes who he is and where he is.

“Woe is me,” he exclaims, “for I am undone!” Who is he? He is a man of unclean lips living in the midst of a people of unclean lips. And let’s make things perfectly clear here. It wasn’t just his lips and his people lips that were unclean. From head to toe, inside and out, St. Isaiah was impure, as were the people among whom he lived. Where is he? He is in the presence of the King, YHWH Sabaoth, and more than that, his unclean eyes have seen Him. (cf. Isaiah 6:1-5)