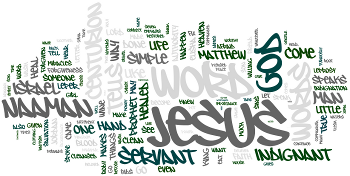 You have today the story of two different men. They’re both Gentiles. They’re both military commanders. They both have a grave concern that they want God to fix. And that’s where their stories diverge.

On the one hand, you have the commander of the armies of Syria. He’s a man of honor, nobility, and valor. To this man, Naaman, was given victory over Syria’s enemies, including Israel. As it happened, on a particular raid, they had brought back a girl captive from the land of Israel. This girl waited on Naaman’s wife.

On the other hand, you have the commander of a garrison of Roman soldiers—a centurion. He, too, was an honorable man. He knew his place in the armies of Rome—knew the authority he had been granted, and the responsibility that accompanied that authority. For, “I say to this one, ‘Go,’ and he goes; and to another, ‘Come,’ and he comes; and to my servant, ‘Do this,’ and he does it.” In other words, the centurion knew the power of a word. 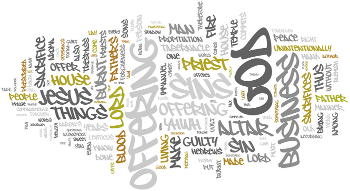 Jesus asked, “Did you not know that I must be about My Father’s business?”

Thus is prescribed the Sin Offering at the Temple, the House of YHWH, the living God. In such manner is a man cleansed of the sin he commits unintentionally against the Lord’s commands, and he is forgiven before the Lord his God.

If a person commits a trespass, and sins unintentionally in regard to the holy things of the LORD,...[i]f a person sins, and commits any of these things which are forbidden to be done by the commandments of the LORD, though he does not know it, yet he is guilty and shall bear his iniquity...[i]f a person sins and commits a trespass against the LORD by lying to his neighbor about what was delivered to him for safekeeping, or about a pledge, or about a robbery, or if he has extorted from his neighbor, or if he has found what was lost and lies concerning it, and swears falsely—in any one of these things that a man may do in which he sins: then it shall be, because he has sinned and is guilty, that he shall restore what he has stolen, or the thing which he has extorted, or what was delivered to him for safekeeping, or the lost thing which he found, or all that about which he has sworn falsely. He shall restore its full value, add one-fifth more to it, and give it to whomever it belongs, on the day of his trespass offering. And he shall bring his trespass offering to the LORD, a ram without blemish from the flock, with your valuation, as a trespass offering, to the priest. So the priest shall make atonement for him before the LORD, and he shall be forgiven for any one of these things that he may have done in which he trespasses. (Leviticus 5:15a, 17; 6:2-7)

Thus is prescribed the Guilt Offering at the Temple, the House of YHWH, the living God. In such manner is a man cleansed of the sin he commits—the guilt removed from him—and he is made right in the sight of man and before the Lord his God.

When any one of you brings an offering to the LORD, you shall bring your offering of the livestock—of the herd and of the flock. If his offering is a burnt sacrifice of the herd, let him offer a male without blemish; he shall offer it of his own free will at the door of the tabernacle of meeting before the LORD. Then he shall put his hand on the head of the burnt offering, and it will be accepted on his behalf to make atonement for him. He shall kill the bull before the LORD; and the priests, Aaron’s sons, shall bring the blood and sprinkle the blood all around on the altar that is by the door of the tabernacle of meeting. And he shall skin the burnt offering and cut it into its pieces. The sons of Aaron the priest shall put fire on the altar, and lay the wood in order on the fire. Then the priests, Aaron’s sons, shall lay the parts, the head, and the fat in order on the wood that is on the fire upon the altar; but he shall wash its entrails and its legs with water. And the priest shall burn all on the altar as a burnt sacrifice, an offering made by fire, a sweet aroma to the LORD...The burnt offering shall be on the hearth upon the altar all night until morning, and the fire of the altar shall be kept burning on it. (Leviticus 1:2b-9; 6:9b)

Epiphany of Our Lord

A friend of mine says that the church has a problem. Her members like to sentimentalize the Nativity. In a sense, he’s not far off. There are manger scenes set up on many street corners, and every single one of them makes for a peaceful image. Many churches put on Christmas pageants, where some children wear angelic wings made from bent coat hangers and others wear oversized brown bath robes and carry a shepherd’s crook. The entire world seemingly gathers to sing “Silent Night,” as if to pretend that it will “sleep in heavenly peace” that night.

The reality of the Nativity—and what follows—is anything but peaceful. First, there’s childbirth. If you’ve ever witnessed it, it is hardly ever peaceful and silent, especially for a first child. And Jesus’ birth was, perhaps, especially strange; being born in a barn, if there were sheep, oxen, cows, donkeys, and camels about, they were likely not kneeling and silently attentive to the commotion going on in the stall where the people were, like you always see in the plastic, plaster, or pewter replicas that can be found around the world. You can also bet that the Infant didn’t spend much time in that manger; he had to be there when the shepherds came and found the family, but in addition to being swaddled, if He was awake, He was likely crying or nursing—it’s what babies do, and Jesus is fully baby at the Nativity.

And then there were those shepherds out in the fields tending to the sheep (so I guess they weren’t even in the stable). Things for them were certainly more peaceful and silent BEFORE the birth was announced. But, their silent, dark night was pierced by a bright heavenly light and the voice of an angel telling them, cowering in fear at this point, not to be afraid, but to go joyfully to find the Babe lying in a manger. It’s not everyday that you’ll find a sight such as this, and I’m not referring only to the angels, because even more showed up and began singing; I imagine the night was lit up like the day time.

So, now, in addition to animals milling about as she’s trying to calm her Baby, now Mary deals with visiting shepherds. I suppose it’s to be expected if you’ve just given birth in a barn, but still, some courtesy would have been appreciated. Of course, this is no ordinary Baby. This is the Son of God.

Circumcision and Name of Jesus

Mary and Joseph were in Bethlehem for a census. There was no room in the inn. Mary gave birth in a stable and laid her Babe in a manger, wrapped in swaddling cloths. This Baby is the Son of God—God in the flesh. Remember everything you’ve heard from me this past month as regards God in the flesh, because it’s all right there in the manger. (cf. Luke 2:1-7)

Shepherds were in the field tending their flocks that night. Then, an angel of the Lord appeared to them. They were frightened, but the angel brought them good news and was joined by a whole host of angels to sing a song:

[T]here is born to you this day in the city of David a Savior, who is Christ the Lord. And this will be the sign to you: You will find a Babe wrapped in swaddling cloths, lying in a manger...Glory to God in the highest, And on earth peace, goodwill toward men!”

The angels depart. The Shepherds make their way to see this thing of which they heard. They marveled, then went around telling everyone the things which they had heard and seen, then returned to their fields and folds. But Mary kept all things and pondered them in her heart. (cf. Luke 2:8-20)

Pause, because that’s what St. Luke does. The Son of God, who is the Word of God, is born in Bethlehem, as the prophets foretold, then Luke pauses for 8 days.