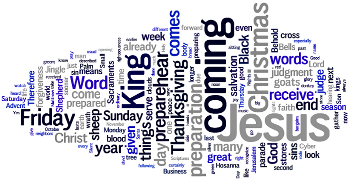 October had barely started, and the store aisles were being set up for Christmas. Even before Halloween, this or that corner of the big box stores were littered with red and green, silver and gold. Of course, right next to it were all of the fall harvest colors—the oranges and browns. Candy corn and candy canes side by side. And this set-up seems to happen sooner and sooner year after year.

Thanksgiving came, and no sooner did the annual parade end that the stores were opening with huge sales and door buster deals. Usually, these kinds of things are reserved for Friday. It started out with a few stores, opening at their regular hours, then a few more stores joined in the “festivities” and they opened earlier and earlier. Friday wasn’t enough; Black Friday spilled into Thursday. Small Business Saturday and Cyber Monday followed, but the big boxes have extended Black Friday into the following week, even to the end of November. No longer do Black Friday, Small Business Saturday, and Cyber Monday have anything to do with any particular day, but with the events themselves. And these events seems to go on longer and longer year after year.

It would seem, by all accounts, that Christmas is here. Lights are hung, decorations are put up, trees sit in many homes already, and the Silent Nights and Jingle Bells have already been resounding for some time. And I admit, we already have our tree in what is becoming its usual spot, and we’ve broken out the Christmas music. You may hear that this is all done in preparation for December 25, but the sights and sounds would be different—should be different—if all we were doing was preparing for it.

As our tree and music choices indicate, those of us with an orthodox Christian background fall prey to this false notion of preparation, too. Not only do you most likely have your Christmas trees trimmed and sitting in their usual spots, even as one now sits in the chancel here, but how many have listened to the Silent Nights and Jingle Bells already? How many braved the crowds to shop the great deals and bargains on Black Friday, Small Business Saturday, and Cyber Monday (not that spending less for what you need isn’t good stewardship)? How many smiled and nodded at the sight of Santa Claus at the end of the parade, signaling the end of Thanksgiving Day when it wasn’t even noon on Thursday? How many have enjoyed the sights and smells of Christmas at Walmart a week into October?

These are not Christmas. These are most certainly not Jesus come to you. Jesus is not on the store shelves, the Jingle Bells, the red, green, silver, or gold, and certainly not Santa Claus at the end of the parade. Prepare, yes, but this is not preparation. Enjoy them, sure, but beware not to be caught up in these things which do not prepare you for Christ and the forgiveness of sins He brings. The bargains of Black Friday and “Jolly Old Saint Nick” at the back of the parade only serve you with yourself, serve you those warm, fuzzy feelings inside on what would otherwise be a bone-chilling day, serve you with things that only whither and decay. The joy and happiness of this kind of preparation rarely lasts past December 25, much like Thanksgiving rarely lasts past noon on the fourth Thursday in November. Away go the reds and greens only to make room for black to accompany the silvers and golds—following the feast of turkey, ham, or goose on Christmas Day it becomes time for the New Year.

Fleeting...all of it is fleeting, like time. Vanity, empty, meaningless, pointless are words the preacher in Ecclesiastes would call it. Time, like an ever-rolling stream rolls on from one moment to the next, and fleetingly, we roll on with it from one season or event right into the next.

Now, we prepare. It’s a word which goes well with the two we heard last week: watch, pray, and prepare.

So, as we enter Advent, we watch and pray as we expectantly look forward to the coming of the King, and in preparation, we do so as we recount the comings described for us in the Scriptures. Yes, the King of kings has come; he has taken on the form of a servant, become flesh in the womb of the virgin Mary, was born and given the name Jesus which means YHWH saves, and lived a life of an ordinary man, though He was no ordinary man. But He is coming again:

Therefore, as we look forward to celebrating His first coming—His incarnation—we prepare for His second coming, described as we heard in last week’s Gospel and will again in next week’s, in the clouds (cf. Mark 13:26 and Luke 21:27) to judge the earth, and we prepare for it by looking at the ways of His coming.

Today, we recall Palm Sunday, as Jesus, the King of kings, rode triumphantly into Jerusalem in order to fulfill His priestly duty by making a sacrifice for sin, which He does as He hands Himself over to the authorities to be sacrificed as the very Lamb of God, and shed His blood on the cross as the once-for-all propitiation for sin. We hear these words: “Tell the daughter of Zion, ‘Behold, your King is coming to you, Lowly, and sitting on a donkey, A colt, the foal of a donkey.’”

His ride into Jerusalem prefigures His coming again in judgment. For, Jesus the Christ rode into Jerusalem to receive the judgment due mankind for their sins. Upon the cross, the Son of God received the full wrath of God and died which is the just judgment for the sin due each man. Therefore, when Jesus comes again, in judgment, the sheep will be separated from the goats, where to the sheep Jesus pronounces, “Come, you blessed of My Father, inherit the kingdom prepared for you from the foundation of the world...,” (Matthew 25:34) and to the goats, “Depart from Me, you cursed, into the everlasting fire prepared for the devil and his angels...” (Matthew 25:41)

Now, we know the litany of things that Jesus describes as having been done by the sheep and not by the goats. Doing these things does not earn the kingdom for the sheep, nor damnation for the goats. The reason they did or did not do these things is what earns them; the impetus behind their doing or not doing, you could say. The sheep hear the voice of their Shepherd—they recognize Him, know Him from the wolves, receive faith from Him that trusts in Him solely for their salvation—and so they serve their neighbors, and especially the least of these, Jesus’ brethren, with God-given good works. The goats reject the Shepherd, deny the faith that Jesus freely gives, and follow after false messiahs; consequently, their works serve only themselves, no matter how much good they do for their neighbors.

Today, we hear of Palm Sunday, and our thoughts should always be directed by Palm Sunday to Good Friday, and the wrath of God due you but received, in full, by Jesus your Redeemer and Savior, and from Good Friday to the Resurrection of Our Lord, and the victory over death that Jesus won for mankind. That’s what we are reminded of on this First Sunday in Advent in preparation for Jesus’ second advent, because “Behold, your King is coming to you.”

Yes, we look forward to Jesus’ second coming, now before Christmas, and throughout all of the days left that God, in his long-suffering mercy and wisdom, has deigned for there to be. The focus of Advent is “prepare,” but it is not the sole season of preparation. That is because you are are Christians prepared by Him at all times for His coming, and especially in this setting. We gather here and look to His Word and the Sacraments as preparation because that is where we are prepared by Him for Him. In His Word and Sacraments is the how and the where Jesus, your King comes to you, and by His coming to you in His Word and Sacraments, you are prepared by Him for when your King comes in the clouds with power and great glory for you and your fellow believers.

“Faith comes by hearing,” St. Paul wrote, “and hearing by the Word of God.” (Romans 10:17) Jesus comes to you when His Word is proclaimed in your hearing, when you gather with others to study it, and even in your own private devotions. Jesus comes to you when the words of Holy Absolution are spoken into your ears—words directly given to Jesus’ called minister to speak from the Scriptures—and those words give you exactly what they say: the forgiveness of your sins for Jesus’ sake! It is in these means that you as sheep hear and recognize the Shepherd. He, in these means, has His way with you, giving you faith and strengthening that faith to receive Him, your King, and preparing you to receive Him when He ultimately comes again in the clouds with power and great glory to receive His Bride, of which you are members, to Himself!

It is with great joy that I have the privilege, week after week, day after day, to give you Jesus in these means. But more than that, I am humbled that you hear the voice of your Shepherd in mine and that I am given to tell you, “Behold, your King is coming to you.”

Therefore, for as long as the Father, in communion with the Son and Holy Spirit should deem, you gather together to receive Jesus, who is your King of kings, your Prince of Peace (Isaiah 9:6), the Lord your Righteousness. (Jeremiah 23:6) You receive Him in His Word and Sacraments. Jesus is here, He is come, and He is come to you for you...Advent, Christmas, Epiphany, Lent, Easter, Trinity—every day of every season.

Therefore, enjoy the parades, the reds and greens, the Jingle Bells, the Black Fridays (if you dare) and all of that stuff. And prepare, because your King is coming to you, “He is just and having salvation.” (cf. Zechariah 9:9) Cry out, “Hosanna to the Son of David! Blessed is He who comes in the name of the LORD! Hosanna in the highest!” Hosanna, that is, save now, O Lord. Be directed to His Word, dear listeners—hear His Word—for there is your King, come to you to save you. He is just and having salvation; therefore, you are forgiven for all of your sins.