[174.29.104.69]
trackbacks: 0
This entry has no trackbacks, yet.
Please enable javascript to generate a trackback url

Today we made homemade pizza!

The morning was slow, more-or-less. I played the gold medal game in my Sochi Olympic hockey simulation, and trounced Canada. Now, I can get back to my Be-a-GM mode, but I think I'll take some time to catch up to it in games played in my Live-the-Life mode.

I had to run up to Walmart to get some more flour for the pizzas. So, off I went, with Mikaela in tow. I needed more ground pork, too, but Walmart was out. Next stop was Safeway. We got what we needed there, and I had a taste for red birch beer, so we stopped at Big-R to get some. 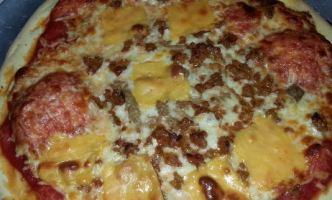 The time came quickly to start making the pizzas. Genevieve made her's (and Tirzah's) first as the regular dough rose. Then, as is usually the custom, I let the older kids top their own. They all tried to be a bit artistic with the toppings, but I think Molly's turned out the most artsy, even without her trying. As you can see in the picture, she made a smiley face out of pieces of American Cheese; air bubbles in the crust gave the face cheeks.

While the evening got a little stressful with the kids, in the end, it turned out alright. Pizzas were made. Sarsaparilla and red birch beer were sipped. A good meal was had by all.

The kids were sent to bed, and Genevieve and I watched the first three episodes of the new season of Community. It's a pretty good show.