[174.29.7.203]
trackbacks: 0
This entry has no trackbacks, yet.
Please enable javascript to generate a trackback url 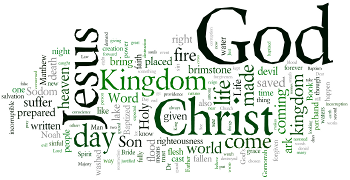 The Pharisees are looking forward to the coming of the Kingdom of God, so they ask Jesus when it would happen. They were anticipating the time when God would come to His people and restore the kingdom to Israel. They were looking for something to happen; they expected to see something happen.

More to the point, the Kingdom of God was standing right there talking to them.

Dear Baptized, when the water was poured over you by God’s command, included with God’s Word, you were washed, you were sanctified, you were justified in the name of the Lord Jesus and by the Spirit of our God. (cf. 1 Corinthians 6:11) As St. Paul wrote it elsewhere, “For as many of you as were baptized into Christ have put on Christ.” (Galatians 3:27) When you were baptized, your robes were washed in the blood of the Lamb and made white, and you were placed in Christ. You are placed into the Kingdom of God, right there into His riven side, a part of the Bride of Christ, the Church—His rib, you could say.

As a member of the Bride of Christ, being in the Kingdom of God, you are prepared, then, for when Jesus comes again. While you, the Baptized, are in the world, not of it, you still suffer because of the devil, the world, and your sinful flesh. Satan rules this earthly kingdom, though His reign is always kept in check by the Father. One day, Jesus will return, and put an end to Satan’s reign forever, casting him into the lake of fire, creating the new heavens and new earth, and putting on the incorruptible where once you had corruption. But that day will come like a thief in the night.

Until that day, you suffer; you are made to suffer—it is your lot in this fallen life. For one thing, you are in Christ, and so the devil and the world are against you. These conspire against you to bring you to denial of your Father in heaven and His Christ. It’s subtle, as little by little, they convince you that God doesn’t care if you budge in one respect or another with regard to His law—“God is love; He will take you as you are,” they say, “He wouldn’t get angry with you and demand justice because you act in accordance with how He made you.” From there it develops into full-on denial: “How can you believe and trust in a God who would demand that you be different than the way He made you?” Of course, this is all predicated on the false assumption that God made you they way you are: corrupted and sinful. This assumes that God is the author of evil.

Until that day, you suffer; you are made to suffer—it is your lot in this fallen life. For another thing, though you are in Christ, you still carry around in your flesh your fallen nature. You are at the same time justified and sinful—fully a forgiven saint in Christ and fully a corrupt and fallen son or daughter of Adam. It’s almost as great a mystery as the two natures of Christ—these are your two natures: saint and sinner. And so you who are given to know the will and Law of God, transgress that will and Law of God. You who are given to trust in God’s providence also doubt the providence of God. You who are given to look forward to Christ’s return become so complacent in your life here that you need to be reminded to watch and pray, just like the disciples in the garden on the night on which Jesus was betrayed. (cf. Matthew 26:40-41)

However, until that day, you are kept secure in the Kingdom of God by the work of the Son of God. For the Kingdom of God has come in it’s power when Jesus was enthroned on the cross. After all, before the great and dreadful day, it was necessary for the Son of God to suffer many things and be rejected by this generation. So, Jesus resolutely set his face toward Jerusalem in order to die. He had you in mind at His coronation, to bring you under His rule of grace, righteousness, life, and salvation. So He took your sin into His flesh, and by His death on the cross, exchanged your corruption for incorruption, your sin for righteousness, your death for life.

Now, He is seated at the right hand of Majesty—the God-man, your brother-in-the-flesh interceding on your behalf before the Father in heaven. There, He makes His pleas for you as your Prophet, Priest, and King, for His sake and by His scars declaring you healed, forgiven, restored, incorruptible, righteous, and alive forever.

These He declares you to be now, though you do not fully realize them yet, in His means of grace. It’s the way that whole sinner-saint thing works here in time. For in the waters of Holy Baptism, you are placed into Christ and made His, where He first makes you clean, giving you incorruption that will ultimately be yours on the last day. In the words of Holy Absolution, the words of forgiveness are spoken into you again and again, giving you the righteousness that is yours in Christ. In the bread and wine of Holy Communion, you are given the very body and blood of Jesus Christ, the Author of Life, whereupon you receive forgiveness of sins, salvation, and life! All of this is done to make you His and keep you in the one, true faith to life everlasting—so that you are prepared for His second coming.

The Day of the Son of Man will catch people off guard. This is why Jesus’ instruction to those in Him are to stay awake and watch. (cf. Matthew 24:42-51; Matthew 25:13; Mark 13:31-37) Jesus compares the day to the coming flood, wherein Noah and seven others were saved in the ark. The rains and the springs breaking forth caught the rest of creation off guard. They were consumed in the cares of life, some even mocking Noah for building the ark, as sensationalized retellings of the tale go. “They ate, they drank, they married wives, they were given in marriage, until the day that Noah entered the ark, and the flood came and destroyed them all.” Likewise the towns of Sodom and Gomorrah...the people were consumed with carousing, that they were caught unawares by the fire and brimstone that fell from heaven in judgment. “They ate, they drank, they bought, they sold, they planted, they built; but on the day that Lot went out of Sodom it rained fire and brimstone from heaven and destroyed them all.”

Still, the Day of the Son of man will be clear. When it happens, all creation will know that it’s happening. “For as the lightning that flashes out of one part under heaven shines to the other part under heaven, so also the Son of Man will be in His day.” You who are in Christ will see it and know that Jesus is returning to take you to Himself, incorruptible, righteous, saved...alive! As for others...”[they] will go on with their daily lives (eat, drink, etc.) as if there were no impending crisis, but all of a sudden destruction will come and it will be too late to repent.” (Dr. Just) As Jesus said, “Even so will it be in the day when the Son of Man is revealed.”

It is telling, I think, that Jesus used the examples of the flood and Sodom and Gomorrah to compare to His coming again. Both events were wrathful destruction, but creation was saved, washed, and restored by the waters of the flood, and by faith some were spared the fires of Sodom and Gomorrah. Dear Baptized, here you sit in the ark of the Church, redeemed and protected from the ravages of the world beyond. You were saved by water and the Word, like the eight souls aboard Noah’s ark. You have been drowned and made new in the flood at the font.

[T]he Divine longsuffering waited in the days of Noah, while the ark was being prepared, in which a few, that is, eight souls, were saved through water. There is also an antitype which now saves us—baptism (not the removal of the filth of the flesh, but the answer of a good conscience toward God), through the resurrection of Jesus Christ, who has gone into heaven and is at the right hand of God, angels and authorities and powers having been made subject to Him. (1 Peter 3:20-22)

Now, you who are washed, who are saved by the waters of Holy Baptism—the water and the Word of God—you are spared from the fire and brimstone that is to come for those who do not believe or trust in God and His Christ. For just as in the days of Sodom and Gomorrah, the unbelieving world will be cast into the lake of fire and brimstone prepared for the devil and his angels. (cf. Matthew 25:41)

But this is not the case for you who have your names written in the Book of Life. As we confess, “[T]he Word of God leads us to Christ, who is the Book of Life, in whom all are written and elected that are to be saved in eternity, as it is written Ephesians 1:4: He hath chosen us in Him [Christ] before the foundation of the world.” (FC, Epitome XI.7, Triglotta) You are Baptized, you are chosen, you are elect in Christ—to you has the Kingdom of God come near, and into the Kingdom of God you have been placed—you are in Jesus Christ, your names are written in the Book of Life. Watch and pray, for the day of Christ will come like a thief in the night, but you have been prepared, you are safely placed in the Bride of Christ, where Jesus keeps you in Him, because you are forgiven for all of your sins.