[174.29.82.144]
trackbacks: 0
This entry has no trackbacks, yet.
Please enable javascript to generate a trackback url

A busy week, or so it felt. As I look over what was done, it doesn’t look like a lot, but what I experienced of it is different than how it reads. I guess that’s because, though it’s a short line or blurb in the retelling, it amounts to more time than it reads, and that would be preparation.

Sunday – Gaudete, rejoice! It’s the Rose Sunday of Advent. Jesus given and received again, where He says He is for His people. Catechesis followed shortly after with the boys, then some time at home. Genevieve agreed to dog sit again, but this time at our friends’ house. She was loaned one of their cars to do the back-and-forth running.

Monday – My day off to look back at the week and enjoy the work that was done.

Tuesday – My week back in the office began as it has all Advent by preparing for the service tomorrow. I was able to get most of a sermon written, which is all I ask of myself at this time. I was also able to do a little work on Christmas Eve, but not much. Back home in time for lunch. We would normally go to the library, but we chose to do that tomorrow in order for the kids to participate in a project they are hosting that day. Therefore, the rest of the day was spent at home, for me and the kids, and mostly at our friends’ house for Genevieve.

Wednesday – Today, I finished up the homily for tonight. Then, I was able to plan the services for March. Back home, and I switched the kids seats to our friends’ car in anticipation of tomorrow, then the family went to the library. Genevieve took the kids in the other car, of course, and I took the van. The kids participated in a snowflake ornament build. I was able to check out some items that I had sent to our library from others in the state: the book that I previously had out from another library, but was unable to finish (The Protector’s War), as well as the DVD Guardians of the Galaxy. After dropping the kids off at home, Genevieve went to dog sit for a little while, then came home to pick the kids up so that we could go to church for dinner. After church, we loaded up the kids, turned the other car on, which after a short while decided to die. So the kids loaded into the van for the short ride home, while Genevieve stayed behind with the other car in the hopes that it would start. It wouldn’t, so I headed back to get her and the seats. That prompted a change in plans for tomorrow, so a change of clothes, some food, and sleeping bags were loaded into the van, and my family would be spending the night at our friends’ house in order to dog sit. 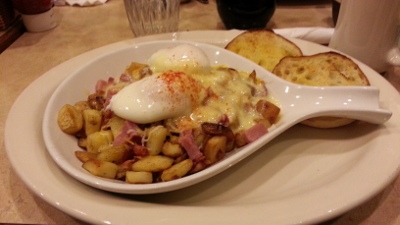 Thursday – That would be because today would be our Colorado Confessional Lutherans meeting. I finally took a picture of my breakfast, so you can see what the Cambridge Skillet looks like. From there, it was time to go to Aurora for the CCL meeting. Then, it was time to head back to Elizabeth and our friends’ house. Genevieve had prepared dinner for all of us, so I waited there for our friends to return from Montana. After a late evening, everyone loaded up and we headed home.

Friday – I was awakened early by a disturbing dream. Back in the office to prepare a sermon for Sunday. I had almost no opportunity to do any fore-work, so I ended up borrowing a sermon again and making some modifications. That took a little while, but after finishing that, I was able to do some reading for the following Sunday’s sermon, Holy Innocents—given the dream I had overnight, it probably wasn’t the best idea for the state of mind I was in. After a short while back home, it was time to make my way to Kiowa for Bible Study. At home, we got to enjoy the company of a good friend who normally comes out for Bible Study.

Saturday – Like I started out say, it was a busy week, so Saturday was a nice day to recuperate a little. Genevieve spent some time at our friends’ house again, not to dog-sit, but to do some sewing, so I got to spend some time with the kids. It was a little different this time than in times past, but I chalk it up to the ever-changing nature of growing children.