This sermon happens to be the same one from last year that I never preached (there was no Vigil Service, even though I had prepared for one). I did make some updates to it as there was a confirmation this year. 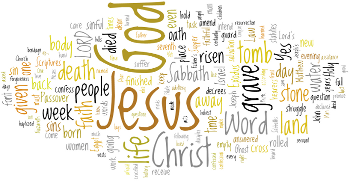 It is finished! (John 19:30) Jesus commended His spirit into the Father’s hand, breathed His last, and died. The work of your salvation is accomplished, completed, finished. Christ has died, and in His death is the remission of all of your sins.

His body is spiced and wrapped by Joseph of Arimathea and Nicodemus, to whom Jesus said that he must be born again by water and the Spirit. (cf. John 3:1-8) They place the body of Jesus in Joseph’s new tomb; no one else is buried there yet—it’s empty. The stone is rolled in front of the tomb, closing in the lone corpse.

The Jews, claiming to be afraid that Jesus’ disciples would rob His grave and claim that Jesus had risen, as He claimed He would, petition Pilate to secure the grave. Pilate gives them a guard to place at Joseph’s tomb. One must wonder, though, were they really afraid of people going into the grave or that Jesus might actually rise from the grave?

Jesus rests. It’s the Sabbath, the holiest of Sabbaths. It’s the seventh day of the week of Passover.

Passover Sabbath, the seventh day of the week that commemorates YHWH’s deliverance of the children of Israel from bondage to Egypt. It’s the greatest time in the history of Israel; God takes His people by the hand and removes them from under the oppression of the task masters in Egypt, and after 40 years brings them into a good land,

a land of brooks of water, of fountains and springs, that flow out of valleys and hills; a land of wheat and barley, of vines and fig trees and pomegranates, a land of olive oil and honey; a land in which you will eat bread without scarcity, in which you will lack nothing; a land whose stones are iron and out of whose hills you can dig copper. When you have eaten and are full, then you shall bless the LORD your God for the good land which He has given you. (Deuteronomy 8:7b-10)

It was during those 40 years that God gave His people the Law—Ten Commandments and statutes and decrees. “So Moses came and told the people all the words of the LORD and all the judgments. And all the people answered with one voice and said, ‘All the words which the LORD has said we will do.’” (Exodus 24:3) And the people grumbled against God and against Moses. Throughout those 40 years, they killed and lied, they stole and cheated, they committed acts of adultery. This pattern continued throughout the history of Israel. Still, they commemorated the Passover every year, rejoiced that YHWH had rescued them, even recalling their oath to do all the words which the LORD has said—this Law and those statutes and decrees with which God prefaces, “I am the LORD your God, who brought you out of the land of Egypt, out of the house of bondage.” (Exodus 20:2)

It’s so easy in faith to say, “Yes, Lord, all that you have said we will do.” You have confessed as much every Sunday during the Lenten season when the pastor asked you before God, “Is this your sincere confession, that you heartily repent of your sins, believe on Jesus Christ, and sincerely and earnestly purpose, by the assistance of God the Holy Ghost, henceforth to amend your sinful life?” And you declared so by saying, “Yes.” You promised on oath by faith to amend your sinful life with the assistance of the Holy Ghost. Well, did you? Or did you transgress the Law of God and His statutes and decrees in the very next moment, if not in word and deed, then certainly in thought? Did you fall right back into your sinful habits as soon as you crossed the threshold of those red double doors? Dear hearers, you have not kept your oath, else you would not have answered, “Yes,” to the question the following week, or the week after that, or the week after that; you would not return here week after week, or even in the days between, to confess your sins and receive absolution.

This evening, we saw an example of that “Yes,” which should have given you pause to think of the time you were asked the same or similar questions. Do you hold all the prophetic and apostolic Scriptures to be the inspired Word of God? Do you confess the doctrines of the Lutheran Church, drawn from the Scriptures, as you have learned to know it from the Small Catechism, to be faithful and true? Do you intend to hear the Word of God and to receive the Lord’s Supper faithfully? Do you intend to live according to the Word of God, and in faith, word, and deed to remain true to God, Father, Son, and Holy Ghost, even to death? Do you intend to continue steadfast in this confession and Church and to suffer all, even death, rather than fall away from it?

You heard the young lady this evening answer “I do”—“Yes”—to all of these questions. You yourselves who have been prepared to receive the Lord’s Supper answered the same. Yet in the time between your answers and this evening, can you say you have lived up to your “I dos” and “Yeses”? No, of course not. There are times when you desired the Scriptures or a portion of them not to be the Word of God. There are times when you confessed with your mouth something contrary to the doctrines that you have learned to know. You certainly don’t have perfect attendance hearing the Word of God or receiving the Lord’s Supper—whether you were ill that one time or simply didn’t feel like going. And no one has ever lived according to the Word of God and remained faithful to Him. Who here has not been tempted to fall away, and still many have given in to that temptation. This is your life, dear hearers; this is how you will end up living, dear Nadra!

You are right there in the Exodus camp with the children of Israel, killing and lying, stealing and cheating, and committing acts of adultery. You break your oath and turn your back on God. What would prevent God from turning His back on you?

Jesus! On the cross, the Father turned His back on Jesus. “Eli, Eli, lama sabachthani?” (Matthew 27:46) To this, Jesus declared, “It is finished!” And He died. The Father’s back is turned once-for-all to His Son on the cross. The Passover is fulfilled, as in Christ’s death and the atonement He won for you on the cross your own exodus from sin and death. While you struggle with them, suffer on account of them and cause others to suffer because of them, they no longer condemn you, for Jesus Christ was condemned in your place and sent to the grave. And there, Jesus rests on the holiest of Sabbaths.

This should have been the happiest of times for the followers of Jesus. Yet, one must think that the question was constantly going through the minds of the women the entire day, intending to go to the grave to continue to care for the body. “Who will roll the stone away?” What is in that question? “Here we are, a few women faced with a giant stone in front of Jesus’ tomb, and there is guard posted there to keep people out. How are we going to get in there?” This Sabbath, their minds and hearts are heavy.

Nonetheless, following the Sabbath they make their way to the tomb to offer such a loving and kind service to the body of the One who had given them so much. To their amazement, the stone is rolled away. What of the guard? Mark doesn’t tell us. Matthew tells us that the sight of the stone being rolled away and an angel descending from heaven frightened them so that they fainted—they became like dead men. (cf. Matthew 28:2-4) Looking in the tomb, the women find no remains—the tomb is devoid of death! The angel is there and says,

Do not be alarmed. You seek Jesus of Nazareth, who was crucified. He is risen! He is not here. See the place where they laid Him.

The tomb is empty, Jesus is risen. Christ has died; Christ is risen!

Born of a woman, born under the Law, this Jesus of Nazareth was born again from the womb of a tomb. The stone and seal could not keep Him in the grave. Bear this in mind, dear hearers, the stone was not rolled away for Jesus’ benefit, but for that of the women and the disciples who stooped in to look. They saw the grave empty!

By this faith, this New Man, you are made, again and again, to confess your sins, to make the oath to amend your sinful life again and again. This New Man hates the Old Adam with which you struggle, and lays hold of the promise of God to give you all blessings for the life to come, even as it looks forward to the fulfillment of the promise to come again, raise you from the grave at the last day, and take you to be with Himself. Yes, you will go from here and sin again—this is your struggle as the two-natured sinner-saint that you are. But your God is faithful, as He visits you again and again in the crucified and risen Jesus Christ to forgive you for all of your sins.

This is the threefold truth on which your faith depends: Christ has died! Christ is risen! Christ will come again!