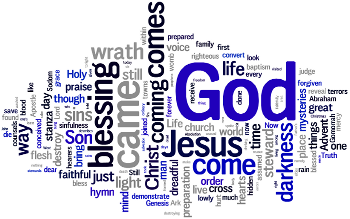 “Therefore judge nothing before the time, until the Lord comes, who will both bring to light the hidden things of darkness and reveal the counsels of the hearts. Then each one's praise will come from God,” the Apostle wrote.

And why not? Why would the church not celebrate such a thing? God, in His infinite wisdom and mercy, assumed human flesh as He was conceived by the Holy Ghost of the Virgin Mary. In the lowly maiden’s womb, flesh and blood formed and came together, sinew joined to bone, and a life was borne. This was no ordinary life, though—this was Life in the flesh. “In Him was life, and the life was the light of men. And the light shines in the darkness, and the darkness did not comprehend it.” (John 1:4-5)

If this was God not coming in blessing, He wouldn’t come this way.

But that’s not the way God came at just the right time. On the contrary, He came just like every one of you. Now, He didn’t just appear on the scene as a man, though He did make an entrance like that at His baptism, but came into this world in very much the same way as you did. He was conceived and born! He was a man in every way as you are, except without sin. This is not God coming in wrath, but coming with compassion and mercy and grace—He has come in blessing, for you.

And then He bore the cross to save you. God still came in wrath, but not in the person of His Son. His Son came in blessing for you in order than the Father’s wrath would not be exacted against you, but against Him! That’s why Jesus came, and the prophets speak to this purpose. God puts Himself in your place, sacrifices His Son in your place, in order to bless you with His place.

You know all-to-well the reasons why. I can’t recount them for you, but they are the very things you had in mind, both known and unknown, as you spoke at the beginning of the service tonight. Every way in which you have breached the commandments of God is a reason—one among so many—for God to come in blessing for you, to receive His wrath for you, to die for you on the cross.

You deserved to die for your sins, but God in Christ died for you. And to this you were joined in your baptism—Jesus’ death and resurrection for your forgiveness and salvation. You are brought back to that flood in the words of Holy Absolution, where you are forgiven again and again and reminded of the promise made to you when you were washed and justified and sanctified. And you are refreshed in all of this as you receive the Sacrament of the Altar, eating and drinking the body and blood of Jesus Christ which He assumed in that most blessed womb. All wrath has ceased, and in these means—these mysteries—you are blessed by the coming of God for you!

To keep you in mind of this, God established the stewardship of His mysteries. The Apostle says that it is required that such a steward be found faithful. He is to bring to your mind faithfully the blessing with which Jesus first came. He does this through Word and Sacraments—the mysteries of God. The steward, in the stead and by the command of Christ, gives you Jesus in order to bless you, fill and sustain you, and give you the Life that He is, that you are kept in the one, true faith until the Lord’s returning.

And so it is done as sung in the second stanza of that Advent hymn: “Still He comes within us, / Still His voice would win us / From the sins that hurt us; / Would to Truth convert us / From our foolish errors / Ere He comes in terrors.” Through this steward, Jesus still comes within you. Through this steward, the voice of Jesus still wins you from the sins that hurt you. All of this is done to convert you, time and again, to Him, to the Way, the Truth, and the Life, in preparation for when He comes again.

And there, dear hearers, is the focus of the season of Advent for the church: preparation for when Jesus comes again. Once He came in blessing, but He will come again in terrors, to judge the quick and the dead. On that great and dreadful day, when Jesus comes again as Righteous Judge, He will be for that time the Light that no darkness can overcome. Now, hearts can hide in the darkness; when He comes again, Jesus will “bring to light the hidden things of darkness and reveal the counsels of the hearts.”

On that great and dreadful day, you faithful will be judged righteous because you have been prepared by the faithful witness of the stewards given to care for you. And your praise, much as it is today, will come from God, though the tune will be a bit different. Today, your praise in tinged with the burdens of this life, both your own sinfulness and sins, and the consequences of that sinfulness, not the least of which is the world in which you live that is hostile to the Gospel. Then, there will be none of that, for, having been prepared for that great and dreadful day, you will forever be living in the presence of God, Father, Son, and Holy Spirit.

Rejoice, dear hearers, the Lord is come and He will come again. You live now by His grace and provision, and you will live forever then because you have you have received His preparation, namely, you are forgiven for all of your sins.