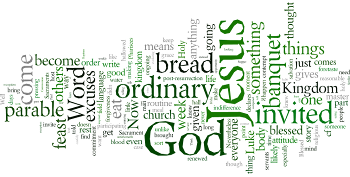 If you wanted to get Jesus to talk to you, you’d say something that sounded religious.

It’s an age-old habit. If you want to impress someone in a given field, you say what little you know about their field. If you want to make a good impression on a native speaker of a foreign language, you say what you can in their language—or at the least, learn to greet them in their language. Your God recognizes this, which is part of the reason why St. Paul was inspired to write, “Knowledge puffs up.” (cf. 1 Corinthians 8:1)

So it should come as no surprise as Jesus was eating with a group of Pharisees, that one of them would speak up and say something religious. Now, Luke did write that they were watching Him carefully, and you know that means that they were waiting for an opportunity to catch Him in an “A-ha moment.” There’s little better way to do that to someone you acknowledge to be a good teacher (cf. Luke 10:25; 18:18) than to shoot off at the mouth something that sounds like good teaching.

“Blessed is everyone who will eat bread in the kingdom of God!”

Sounds okay, doesn’t it? Can you point out anything wrong with it? Will everyone who eats bread in the kingdom of God be blessed? Yeah, I’m sure that’s the case. But Jesus knew this man had other things in mind.

So, He tells a parable. Now, Luke didn’t write that it’s a parable. Jesus didn’t say that the Kingdom of God could be compared to what’s going on in this story. Nevertheless, since Jesus is making a point by telling a story, it is a parable.

A man once gave a great banquet. He had invited all of his friends and relatives. It’s the kind of banquet that they’re used to given and going to. One would host and invite the rest, then one of the rest would host the next one and invite the rest, and so on and so forth. The Pharisees knew this, especially given what Jesus had just told them before today’s text. (cf. Luke 14:12-14) They were also likely participating in just this sort of thing with the meal to which they had invited Jesus.

Well, as the story went, the feast was ready, so the master sent his servants to bring in those invited, but this time, things were different—the guests all requested to be excused. Now, this was likely nothing new. Sometimes, when you’re invited to a party, you just can’t make it because of some other commitment or some other pressing need comes up. The excuses given in Jesus’ parable sound like these sorts of things—some other commitment or some other pressing need has come up. The thing is, though, what you heard are only three of the excuses; it would seem by what continues to happen that everyone invited refused the invitation.

The master told his servants to bring in others and compel yet others to come to the banquet. The difference between these others and those invited is that these others aren’t the sort of people those invited would have invited to their banquets. In fact, these are the kinds of people that would normally only have dreamed of going to such a banquet; to them, this would have been no ordinary experience.

So, then, how does one connect this parable with what the Pharisee said? “Blessed is everyone who will eat bread in the kingdom of God!” Well, the others brought and compelled into the banquet would certainly have thought of themselves as blessed. There they were, enjoying a feast unlike anything they had ever had before and likely would never have again. In that regard, that’s not unlike the feast of bread in the Kingdom of God for those who eat it, especially in the first part.

Also, bear in mind that this feast of bread in the Kingdom of God has a foretaste even now here on earth. This ongoing feast has been celebrated for centuries, known as the Sacrament of the Altar in the post-resurrection church, a fulfillment of the Passover meal, which could be seen as that foretaste in the pre-resurrection church. These days, in the post-resurrection church, Jesus gives His body as bread to eat in order to keep you in the one, true faith unto life everlasting, where you will eat that blessed bread in the Kingdom of God.

The trick is not to become so complacent in this ongoing feast that you find yourself making excuses in order not to take part it in, and in those excuses to become completely justified in doing so. Now, I say that knowing full well that occasionally, something does come up that would keep you away from this hallowed banquet hall, but that is the exception, and not the week-after-week norm. No, there is something more going on in the excuses in Jesus’ parable that translate to a desire not to be here week after week.

There’s an old proverb accredited to Apuleius, a 2nd century Latin poet, rhetorician, and Platonist philosopher. “Familiarity breeds contempt.” Something can become so familiar, so rote, so (dare I say) ordinary that you can find contempt in being there, participating in it, and doing the thing. How often do things become so routine that you loathe being at them? Friday comes, and you cannot wait to get home because it’s been a long five days at work, and you can use a break in your weekly routine. Or perhaps you’ve been at your job for decades, and your skin is wearing thin—it’s long past time to move on. Anything can become so monotonous and routine.

God forbid that this is the case with the Lord’s Supper, the Divine Service, even the other regular activities at church. Nevertheless, I’m afraid that this is exactly what can happen. Think honestly for a moment. You come here week after week. Do you come here looking forward to the service being over so that you can get to something else you’d rather be doing? And that not in childish ignorance, either. If that’s the way you really feel about it, why even come here at all? I’d be lying if I said I never felt that way. God forgive me for such an attitude.

What underscored those excuses, the attitude that is prevalent in wanting to be somewhere other than here? It’s an indifference to the holy things of God. It’s seeing the Word and Sacraments as being ordinary things. It’s thinking that this stuff here is just the same-old-same-old, it doesn’t matter if you miss a week, a month, a year, a decade…

What did the master in Jesus’ parable say about those who thought of his banquet as ordinary? “None of those men who were invited shall taste my banquet.”

At the Word of Jesus, you are invited and gathered here around Him, His Word, and His Sacraments. He deigns to grace you with His presence again and again in these ordinary-looking means. But they are anything but ordinary, for they are Christ for and in you.

Now, it’s understandable to think of the Word and water as ordinary, though the very Word of God declares of them that they are anything but. However, to consider the body and blood of Jesus, the very Son of God incarnate, as ordinary—that should be unfathomable with any amount of holy, common sense.

Still, as I said, you are here, brought to this hallowed hall by God, the Holy Spirit, to hear Jesus in His Word proclaimed to you by His called servant, to receive Jesus in that proclamation, and to be renewed in body and soul by His Word and Sacrament. He gives Himself to you in these means in order that you would be His forever, to be blessed by Him to eat bread in the Kingdom of God. So He comes to you and cleanses you from this attitude of indifference. No, these are no ordinary means—they are God come down to you in grace and power; they are your life and salvation. They are the forgiveness of all of your sins!