I kinda forgot about this category, too. This one, for a much longer time.

When I last wrote in this category, I had gotten a new laptop on which I installed Ubuntu 10.10. Since then, I really hadn't updated that computer.

I have, however, since then acquired a new laptop on which I installed Ubuntu Budgie 18.04. It's a nice machine. It came with 4GB of RAM, which I upgraded to the maximum of 16 so that I can use the virtual machines that I also install on it (primarily Windows 7 so that I can use Logos on it). It's been almost two years, now; I got this machine at about the same time that Ubuntu Budgie 18.04 was released (by the version number, that would have been April 2018).

As with all of my Ubuntu experiences, this one has been good, too, so far. I don't expect that to change.

Seems I had completely forgotten about this category. Well...

When I first got the MacBook, I mentioned that it needed to have the battery serviced. That was over three years ago.

In July 2018, I purchased a new battery for it. The old one finally got to the point that it was swelling and pushing the track pad up, causing it to break through the deck.

Otherwise, I'm using it still, transporting it back and forth to the office for work and using it at home for general computing needs.

They seem to cause an issue with my site, specifically on the back end with my host. I don't know exactly what the deal is, but it is spiking my resource usage. I got an error twice in the last post trying to include tags. I've since rebuilt the tag database and omitted the use of tags in that post, and things look to be running a little more smoothly.

Oddly enough, the tags are loading more quickly, too, in the blog back end...

If Jesus were to return tomorrow or the next day or the next week, would you know it? Do you know what to expect? Will you recognize the signs and the events surrounding His return? Well, according to what Jesus once said, there won’t be an eye on earth—living or dead, believing or not—who will not know that He is returning when He comes back. (cf. Matthew 24:25-27) So, you will most certainly know that Jesus is returning when the Day comes, expecting it or not—the signs will be given, the events will happen, and you will know.

“Watch therefore, for you know neither the day nor the hour.” Watch, Jesus tells you. What does that mean? Why would He say that if you’re going to know it when He returns anyway?

Festival of the Reformation (transferred) 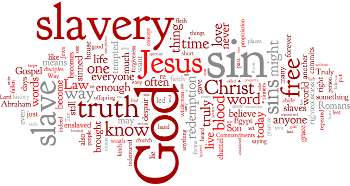 “Truly, truly, I say to you, everyone who commits sin is a slave to sin.”

“Slave” and “slavery” are words that carry a lot of weight. When Jesus tossed out that word in talking to the Jews who had believed in Him, it did more than just catch their attention. It would have thrown up all kinds of warning bells and whistles and put them on the defensive, as you heard in the text. I suppose it’s akin to throwing around the word “racist” these days as a way of insulting those who don’t share one’s opinion. In a way, the words “slave” and “slavery” do that still today.

As I was growing up, I would often wonder what it would be like to be an angel. The stories of the angelic visits and visions from the Old Testament would fill my head. Coming from the throne of God to man to relay a message. To fight on behalf of God’s justice against the corruption on the earth. The visions that Ezekiel and Daniel had of the angels would often come to mind—frightening images of four-head creatures with wings and eyes in the wings, and the warriors that would contend against the princes of the Persians. To have been the angel which touched the lips of Isaiah with a coal from the incense as others are flying around the smoke-filled throne room singing God’s praises was an awe-filled dream.

I often got the picture that angels had it made. They were, in my estimation, the next best thing to being God. At least, the ones who remained in the service of God had it made and were the next best thing. I’m sure I’m not alone in that assessment, as I would estimate that there are some here who have imagined or dreamed or also wondered what it would be like to be an angel.

What if the parable of the Samaritan and the traveler isn’t as complicated as it is made out to be?

It’s a simple story, really. It tells a moral tale. A certain man was traveling to Jericho. Along the road, some thieves stripped him of his clothing, beat him senseless, and left him for dead, naked, alone, and broke. Two of Jerusalem’s religious elite pass by him. Neither of them helped him, but did their best to avoid the man by walking around him on the other side of the road. It wasn’t until a Samaritan came along—a half-breed lowlife, according to the Jews—that the man finally received some help.

This certain Samaritan bandaged the man’s wounds, salving him with wine and oil. Then, placing him on his own animal, he takes the man to an inn, pays for his room and board, and sees to it that the innkeeper takes care of him, promising to repay him any extra expenses upon his return. It was certainly a good thing that the Samaritan had done, but you’ll notice that nowhere in the parable does Jesus call him good, as has become part of common parlance—the Good Samaritan.

But that is the moral of the story—what the Samaritan did. If you want to be good—and be saved—then, “Go and do likewise,” as Jesus said.

When Jesus began talking in St. Luke’s 18th chapter, he told a parable “to the effect that they ought always to pray and not lose heart.” You probably know the story. A widow had an adversary against whom she sought justice from a judge who neither feared God nor respected man. That’s probably the absurd part of the parable, but for the sake of the Jesus is illustrating, it works. So, the widow goes to this judge time and again seeking justice. For his own sake, the judge eventually relents and grants the widow her case. Jesus’ point is that God is much more just than this judge; He will give justice to His elect who cry out to Him day and night, and that speedily!

That’s when He moved into the parable you heard today. You see, the widow in the parable knew she couldn’t rely on herself to get the justice that she needed. But there were others who were listening to Him speak who did trust in themselves, who thought themselves righteous, who despised others as beneath them. With the widow in mind, Jesus told them the parable.

To better understand this text, it might be helpful to understand it’s place in the grander scheme of St. Luke’s Gospel. This is the beginning of chapter 16, which naturally follows chapter 15. Chapter 15 is known, of course, for the three parables it contains: Lost Sheep, Lost Coin, and the so-called Prodigal Son. Jesus told these parables to the Pharisees to demonstrate the love of God and all of heaven for the lost, because the Pharisees scoffed at Jesus for receiving and eating with sinners and tax collectors.

The parable of the Prodigal Son presented Jesus with an opportunity to shift His focus. In that parable, as you know, Jesus told of a young man who essentially told his father to drop dead—he demanded his share of the inheritance, then ran off to a distant country and squandered it in wild living. The older son, faithful to the father, remained home and tended to what was left, and all of that was going to be his upon his father’s death. Conditions had grown bad where the younger son was, and he was left with nothing. Hopeless, he devised a scheme tor return home to be a servant in his father’s house; when he got home, however, he was never able to follow through with the scheme. His father ran out to him on the road, called out for a robe, sandals, and the family ring to be placed on his son, and called for a fattened calf to be prepared for a feast—his lost son had returned to him, and he was going to have a party, for “there is joy before the angels of God over one sinner who repents.”

Something was missing, though. The older son refused to join the party. Like the first time, the father ran out to him and urged him to join the festivities—his brother has returned! And that’s how the parables ended. Jesus didn’t say whether or not the older brother joined, probably because he wanted the Pharisees—the older brothers—to realize that they, too, could rejoice over repentant sinners and join them in the party to come.

Much has been made of these numbers, and much can be made of them. The people of God love to pour over them and decipher them, and it can be fun to do so. Three and seven are numbers representing holiness, divinity, unity, and completeness—as in the Trinity and the fullness of the week or the fulfillment of the week in the Sabbath. 4000 is broken down into its parts: 4 times 10 cubed—four corresponding to the whole creation, as in the four corners of the earth, and ten representing the Decalogue, or Ten Commandments, the law and governance.

Many sermons have been prepared around these numbers and their significance. Often, when covering Biblical numerology, these sermons overlook the more important part of today’s text.