A Reflection for St. Michael's Day

I'm going to put the entirety of this article on the front page. This is a real picture of church growth. This is a real picture of the unity between the Church on earth and the Church in heaven. The unity—the communion—is centered around the Lamb of God. As you may have read in my sermon from yesterday, it is His blood which gives us occasion to sing together with the angels and archangels and all the company of heaven.

This is the story of how one small, country parish, nestled between wheat fields in the vast stretches of the Texas panhandle, astounded the experts on church growth by becoming a megachurch overnight, without even trying.

The gravel parking lot around St. John’s began to fill early that morning. The shadow from the steeple cast the image of the cross on the western side of the church as families from miles around climbed out of Fords and Chevrolets and the occasional Buick to make their way into the sanctuary. The pastor stood by the front door, greeting folks who came in, asking about Aunt Susan’s broken hip, and the Reynold’s new horse, and how the football game how turned out in Sunray the other night. The man of God who served this parish wasn’t much to look at, and his accent was a bit too northernish for most people’s tastes, but they loved the man anyway. He had baptized their children, buried their grandparents, and preached a fairly decent sermon most Sundays.

By the time church was ready to begin, it still hadn’t happened—that shocking influx of worshipers I spoke of. In fact, things looked just about as ordinary as ordinary could be. The Kirkpatricks, with their five children, took up most of the next-to-last pew, just like every Lord’s day. The spinster organist, Ms. Schultz, was playing softly and hitting, well, most every note. Hymnals were opened to the page where the divine service would soon begin. At 10:30 sharp, Pastor Baker walked up front and spoke the same words he did at the start of every Sunday morning service, “In the name of the Father and of the Son and of the Holy Spirit.” And the congregation responded with a hearty, “Amen!”

Then, without any warning, it happened. The floodgates were opened. Worshipers began streaming in. Before the congregation had finished saying, “Amen,” this rural Texas minichurch was transformed into the mega of megachurches.

Through the stained glass windows and the steeply pitched roof, seraphim swooped down from celestial realms. Each had six wings: with two they covered their faces, and with two they covered their feet, and with two they flew. And around the sanctuary you could hear them chant one to another, “Holy, holy, holy is the LORD of hosts; the whole earth is full of His glory!” The foundations of St. John’s shook at the sound of their voices and the whole church was filled with the smoke of incense.

But they were not alone. Cherubim winged their way down from the heavenly Jerusalem. Not the cute, chubby Precious Moments’ angels, but massive, manly warriors who stationed themselves like sentinels around the sanctuary, belting out the words to every hymn sung, adding their Amen to every divine word read and preached that day.

But the angels were not alone. With that angelic crowd came saints beyond number, men and women who had fought the good fight, finished the race, and gone on to glory. But here they were, back at St. John’s during this Sunday morning service to lend their voices to the earthly choir of farmers and ranchers and coaches and teachers who were still on their way to the heavenly Jerusalem. Every pew was packed. Standing room only in the aisles. Some sat on the rafters and looked down with serene gazes upon the altar, where, wonder of wonders, there was a throne. And on that throne was a Lamb, slain yet alive, sacrificed but resurrected. Every face of every worshiper, angelic and human, earthly and heavenly, was fixated upon His face, for there they beheld the face of God Himself.

With angels and archangels and with all the company of heaven, the people of St. John’s lauded and glorified the name of that Lamb, their Lord Jesus Christ, that day. Every song shook the building as the celestial and terrestrial choirs blended their voices. The Lord’s Supper was a reunion meal, where the folks on earth and the saints in heaven received from their Host the food above all foods and the drink that quenches the deepest thirst. 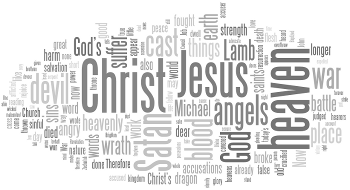 War broke out in heaven. Let that sink in for a moment.

It seems unfathomable. The place where the Holy God reigns and controls all things is the place thought of to be peaceful. Yet, war broke out in heaven. The Apostle John was permitted a glimpse of this heavenly battle:

And war broke out in heaven: Michael and his angels fought with the dragon; and the dragon and his angels fought, but they did not prevail, nor was a place found for them in heaven any longer. So the great dragon was cast out, that serpent of old, called the Devil and Satan, who deceives the whole world; he was cast to the earth, and his angels were cast out with him. Then I heard a loud voice saying in heaven, “Now salvation, and strength, and the kingdom of our God, and the power of His Christ have come, for the accuser of our brethren, who accused them before our God day and night, has been cast down. Therefore rejoice, O heavens, and you who dwell in them!”

War broke out in heaven. Michael and his angels fought Satan and his angels, and Michael prevailed. Satan was cast out; no longer was there a place for him in heaven. And the heavens and all who dwell in them rejoice.

So, are they bug bites? That’s what we thought for most of the week. That thought changed near the end of the week, though. Of course, we were scratching our heads (pun intended) trying to figure out what exactly was going on with our little girl. Otherwise, when I wasn’t thinking about that stuff, I tried to see to what I needed to do during my regular work week.

This was a good week, for the most part. Study went well, though the fruits of it weren’t readily apparent. I had a day of study away from the office. There was also some concern over one of the kids. So, let’s get into the meat of it, shall we? 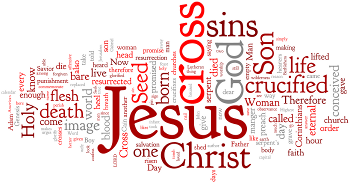 “So the LORD God said to the serpent: ‘Because you have done this, You are cursed more than all cattle, And more than every beast of the field; On your belly you shall go, And you shall eat dust All the days of your life. And I will put enmity Between you and the woman, And between your seed and her Seed; He shall bruise your head, And you shall bruise His heel.” (Genesis 3:14-15) So did YHWH curse the serpent in the Garden, and in so doing, promise salvation for Adam and the woman and all that would be born of them—for you and for all the world, dear hearers. This promised salvation will come by way of the Seed of the Woman.

After this promise, Adam called his wife Eve, for she would be the mother of all the living. She bore him a son whom they named Cain, for she had acquired a man, the LORD. (cf. Genesis 4:1) She thought her son the promised Seed, but she was mistaken as this one was conceived and born in sin and unable to crush the serpent’s head. What he was able to do was kill his brother, and for that, he was cursed from the earth, a banishment similar to that of his parents. Adam knew his wife again, she conceived and bore another son, Seth, “For God has appointed another seed for me instead of Abel, whom Cain killed.” (Genesis 4:25b) Still, they did not get it.

I’m going to make this another short one.

Sunday went pretty normaly with the Divine Service and two catechesis classes, except that Genevieve had to stay home with an ill Tirzah. In catechesis, the young lady, we had finished OT Catechesis and began NT this week. Monday was a good day off, though Tirzah still was sick. Tuesday started out with a normal day in the office, wrestling with the texts for the upcoming Sunday; on Tuesdays, though, the family normally goes to the library, but with Tirzah still ill, I took the other three kids. The kids got books, and I came home with some movies. A someone normal Wednesday in the office preparing for the evening’s studies. I also had to prepare for tomorrow morning, as I was teaching the breakfast Bible Study. The evening study went really well, but I was left with a bunch of mental fatigue due to information overload. Thursday started off really nicely—more study, more information, more brain strain. I was able to do some recovery this evening. Friday came and it was time to write the sermon; it was the normal exercise that it has been the past few weeks. I was able to take some time to prepare for Bible Study this evening. After Bible Study, it was back home for some pizza; I was hungry and tired. Saturday was spent watching kids and their movies, the evening in finalizing the sermon.

In a recent video, Victoria Osteen proclaimed to the people at the church she “pastors” with her husband, Joel,

Joel and Victoria Osteen are “co-pastors” of Lakewood Church, a church which makes every other mega-church look minuscule by comparison. As evidenced by Victoria’s little speech, the Osteens preach what is known as Prosperity Gospel. Prosperity Gospel has at its core the belief that God’s greatest purpose is your happiness, “[D]o good, ‘cause God wants you to be happy.”

It feels like slow progress, if at all. Things just seem...off. I spend mornings in the office, and I get work done, but it feels more difficult to do it. I get a sermon written, but it doesn’t feel like I’ve said everything that needs to be said. I find myself questioning if I’m doing what I normally do, what is part of my normal routine. Well, such was this week...