It should be fixed, now. 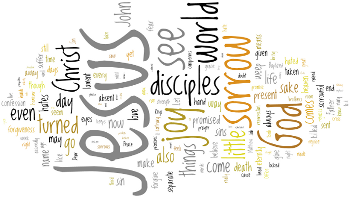 With these words, Jesus sought to comfort His disciples. Up to this point, He had been telling them that the world would hate and reject them. This is the case because the world hates and rejects Him, and, “A servant is not greater than his master.” (John 16:20a) Jesus continued, “If they persecuted me, they will also persecute you...all these things they will do to you for My name’s sake because they do not know Him who sent Me.” (John 16:20b-21)

The way of life will be difficult for the disciples, but first, “a little while,” and they will not see Jesus. Jesus is making His way to the cross. There He will be crucified. There He will die for the sins of the world—the propitiation, shedding His blood for the remission of sins. He will be taken down from the cross and placed in a grave. And the disciples will cower in fear and sorrow, hiding from those who hated Jesus because they will come after them.

“Most assuredly, I say to you that you will weep and lament, but the world will rejoice; and you will be sorrowful, but your sorrow will be turned into joy.”

Jesus is dead and buried. The disciples weep and lament and are sorrowful. The world rejoices.

But it doesn’t end there. Jesus promised that it wouldn’t. “The Son of Man must suffer many things, and be rejected by the elders and chief priests and scribes, and be killed, and be raised the third day.” (Luke 9:22, emphasis mine) The third day comes, and the tomb is empty. Some women found it that way, ran away in fear, even though they were reminded of Jesus’ promise. Eventually, they made their way to the disciples and told what they had said. The disciples are in disbelief, though. Peter and John ran to the tomb, and they believe as a result, but there is still doubt and fear and sorrow. That night, they and 8 others are in the upper room, and the doors are locked.

“Your sorrow will be turned into joy.”

Into this locked room Jesus manifests Himself to the disciples. “Peace be with you,” He says, and He shows them His hands and side. Then, the disciples were glad when they saw Him. (cf. John 20:19b-20) Their sorrow has been turned into joy. For a while they did not see Jesus, but after a little while, they did—the night of the resurrection.

“Jesus said to them again, ‘Peace to you! As the Father has sent Me, I also send you.’” (John 20:21) Three years of seminary education at the feet of Jesus, and He now ordains them. He breathes on them and gives them authority to forgive and retain sins in His name. Jesus establishes the Office of the Keys, and the Church has Her mission: forgive the penitent, withhold forgiveness from the unrepentant. And they are sent out into the world to make disciples by baptizing and teaching. (cf. John 20:22-23; Matthew 28:18-20)

But they aren’t to go yet. It would be another 50 days before they begin to go out. In 40 days, Jesus would ascend. Taken from their sight, it would seem once again that Jesus has abandoned them, but as He would say, He is with them always to the end of the age. (cf. Matthew 28:20) This time, they seem to get it. Jesus could have said it again, and it was said, “A little while, and you will not see Me; and again a little while, and you will see Me, because I go to the Father.” “Men of Galilee, why do you stand gazing up into heaven? This same Jesus, who was taken up from you into heaven, will so come in like manner as you saw Him go into heaven.” (Acts 1:11) That day, they returned to Jerusalem with joy. In ten days, they would go into the world.

What Jesus said still held true, though. The world which hated Him will hate them, too. Many heard them and believed; many did not. Those who didn’t worked against them, hated them, and even killed them. But there was no sorrow there; on the contrary, there was great joy because Salvation had come into the world, and they were privileged to have it and speak of it to the world. Let Jesus’ enemies take their life, they would have won nothing because the Kingdom remained with the disciples.

You still live in a world that hates Jesus, and because it hates Him it hates you, too. Let the brethren in Africa and the Middle East serve as the extreme example to you: run out of their homes, marked for death, beheaded, all for bearing the name of Jesus. Let our fervent prayer for them ever be that they be strengthened to make a good confession: “Go ahead, take my head, I have a God who will give me a new one in eternity.” There is sorrow there, yes, but also joy in such a confession. While they do not now see Jesus face-to-face, they will yet see Him in eternity, with their own eyes, right along with Job. (Job 19:25-27)

You weep with them. You mourn them. These are your brothers whose lives are being taken for Jesus’ name sake. You share in their sorrow, but for your own part, your suffering and sorrow do not compare with theirs. Still, you do suffer and you do deal with sorrow. The freedoms you once enjoyed are seemingly being eroded day-by-day. You are mocked by unbelievers, told that you believe in a silly superstition. You may even have friends and acquaintances and family members who outwardly tolerate you and your Christianity, but behind your back mock and revile you for the sake of Jesus Christ. Even some of your brothers and sisters in Christ may despise you because you carry yourself more joyfully and confidently in the face of sorrow or because they know the sin with which you struggle and cannot conceive how it is that you can call yourself Christian and live with such a sin.

You might as well be having your head cut off. It’s enough to make you want to throw your hands up in disgust and ask, “What’s the point?” “Where’s God when I need Him?” “Why won’t God answer me when I pray to Him?” “Is God really as absent as He seems?” “Is God really there?” The world is against you, and it feels like God isn’t even for you? You suffer and are downcast, and the world rejoices. “Most assuredly, I say to you that you will weep and lament, but the world will rejoice; and you will be sorrowful...”

May our prayer for each other be the same: strength to make a good confession. The strength comes from the fact that Jesus keeps His promises. In a little while, you will see Him, and your sorrow will be turned to joy. One day, Jesus will return, just as He promised, and on that day, sorrow will be turned into joy for eternity, and God will wipe away every tear from your eyes. (cf. Revelation 7:17)

Until then, the promise that Jesus made is kept. Dear Baptized, God is not absent as it may seem at times. He is with you always to the very end of the age. He comes to you through His Word and Sacraments. He comes to you, as He did to His people through the apostles as the Office of the Keys is exercised. Jesus comes to you with forgiveness. You cannot see Him, at least not yet, not with these eyes. Jesus hides His glory from you now out of great love and concern for you. You do, however, hear it. You do, however, feel it and taste it: water, the words of Holy Absolution, some bread and wine. These are the means Jesus uses to come to you and give Himself to you for forgiveness, life, and salvation. He is with you, as He promised, in the means that He has given to His church. You don’t see Him, but by His grace you do believe Him.

For now, sorrows will come, but God is not absent. Though you do not see Him, He is fully present with you to see you through them.

What then shall we say to these things? If God is for us, who can be against us? He who did not spare His own Son, but delivered Him up for us all, how shall He not with Him also freely give us all things? Who shall bring a charge against God's elect? It is God who justifies. Who is he who condemns? It is Christ who died, and furthermore is also risen, who is even at the right hand of God, who also makes intercession for us. Who shall separate us from the love of Christ? Shall tribulation, or distress, or persecution, or famine, or nakedness, or peril, or sword? As it is written: “For Your sake we are killed all day long; We are accounted as sheep for the slaughter.” Yet in all these things we are more than conquerors through Him who loved us. For I am persuaded that neither death nor life, nor angels nor principalities nor powers, nor things present nor things to come, nor height nor depth, nor any other created thing, shall be able to separate us from the love of God which is in Christ Jesus our Lord. (Romans 8:31-39)

Jesus Christ has conquered sin, death, and the devil and given you the victory. These afflict you now, but only temporarily. These may be against you, but God is for you in Christ, and their charges against you are false and overturned for the sake of Christ. Therefore, through Jesus Christ, you are more than conquerors; you are redeemed, restored, renewed, forgiven.

The sorrows that cause doubt, the fears that cause dismay, the faithlessness and sin cannot separate you from the love of Christ. Nothing can snatch you out of Jesus’ hand (cf. John 10:28-29), even when it feels like He is miles away from you or indifferent to your plight. On the contrary, Jesus is near, at hand, with you always, to see you through it, bring you up out of it, and forgive you. And He reminds you of His nearness in these hallowed halls every week—all the time.

By the grace of God, then, your sorrow is turned into joy every week. Every time two or more are gathered in the name of Jesus, He is there giving Himself to you. And when Jesus is present in His means, even if only for a brief moment, sorrow is turned into joy: joy that Jesus is a faithful God who keeps His promises, joy in the hope of the resurrection where those who have been given trust in Jesus will unite in joy and songs of jubilation as they are raised from death to life eternal. Jesus is present as He promised, to turn your sorrow into joy as He forgives you for all of your sins.